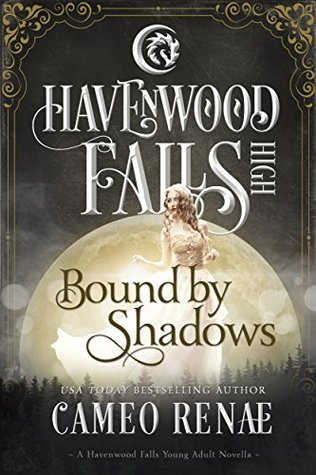 Welcome to Havenwood Falls, a small town in the majestic mountains of Colorado. A town where legacies began centuries ago, bloodlines run deep, and dark secrets abound. A town where nobody is what you think, where truths pose as lies, and where myths blend with reality. A place where everyone has a story. Including the high schoolers. This is only but one…

Eris Blaekthorn can’t believe what she and her father find when two strangers come knocking on their door. According to the visitors, a memory spell caused them to forget a place called Havenwood Falls, including their life there and all the people in it. But when the strangers remove the spell, secrets from the past start to unravel.

Eris learns she has an older brother in the small Colorado mountain town. He’s trapped in a coma, caused by dark magic. But they don’t know who did it or how. Her father agrees to leave their home in New Mexico and return to Havenwood Falls—a place he left to keep Eris safe. There, she learns about her family history and who she really is, which becomes the biggest surprise of all.

She also meets Rylan Giles, a senior at Havenwood Falls High, and her brother’s friend. He’s beautiful and snarky, and their attraction to each other can’t be denied.

As events start to spiral and danger rises, Eris turns to Rylan for help in finding the person who spelled her brother so she can save his life.


Now, I know a lot of readers aren’t novella fans and I understand. However, some novellas can really be a lot of fun or even add to an existing series story line. Cameo Renae is one of my favorite authors, not only for her writing, but for her sweet online persona. In other words, she’s a sweetheart. She writes mainly for young adults and she was the first YA writer that I remember reading and enjoying, as an adult. This series is made up of novellas all set in the same mostly paranormal inhabited town. Cameo is just one of several authors involved in writing these.

Eris is seventeen and lives with her father in New Mexico. When visitors come, Eris and her father realize that their whole life is a lie-of sorts. This realization takes them to the small town of Havenwood Falls, in Colorado. Not long after they arrive, Eris is swept into a whole new life, one that’s full of witches, magic, shapeshifters, and at least one ghost. She soon discovers that dark magic is being used against those close to her. And, yes, I am being vague on purpose.

My favorite character was Eris. She may be only a teenager, but she is strong-minded and doesn’t back down when confronted with bad news or dark magic. She jumps in with both feet to try and solve problems concerning her family and is even willing to go it alone if she has to. She meets Rylan early on in the story. Rylan was taken in by a family in Havenwood Falls after losing his mother. He’s eighteen and the best looking guy Eris has ever seen-and he lives next door. He’s cocky and very sure of himself. I wasn’t sure if I was going to like him at first, but he grew on me. He was extremely supportive of Eris and very protective as well. Of course, he is the love interest of this story. There’s several other characters important to the story, and they were also well realized-which is a very good thing in a novella.

This was an extremely fast read and that’s mostly due to Renae’s storytelling ability. I literally did not put it down once I started it. I was pulled into the story immediately and needed to know what was happening, so ignoring everything else, I dove in and stayed in. Another plus, there wasn’t a lot of filler like you see so often with novellas.

There’s a fair amount of action, but of course not as much as in a longer book. There’s a romance happening a bit as well. Not all of the novellas will have a sequel, but this one will have one that publishes in September. I was really happy about that, not because of a major cliffhanger though-thankfully! There are a few loose ends, and people and situations I want to know more about so, of course, I want to read the sequel.

Highly recommended to people that enjoy young adult paranormal books, ages 14 plus. And just a heads up, none of this one takes place in a high school, although the sequel might.