Pizza is an important food group for Anise, but she obviously gravitates toward the sweets. She loves oozy-gooey treats like brownie sundaes, bread pudding, and toffee cake.


If your protagonist’s plan B hadn’t panned out–what would have been her fallback career?

If Anise couldn’t keep baking, she probably would’ve ended up like her mom, working whatever odd jobs she could find. Nobody wants to hire a witch—it’s too much trouble!

Anise is a pro at buttercream roses thanks to working grocery store jobs, but they’re not the most modern. Now that she has access to more ingredients and tools, she’s experimenting more with drip cakes and mirror glazes and whatever the trendy Youtubers are playing with.

I mention this in Deadly Sweet’s acknowledgments! I used to take weekend baking classes at the CIA in Hyde Park, and they’d assign you a partner to work with for the day. The woman I was paired with one time earned her first strike because she kept calling me Lorraine (that’s not my name??). Then she dropped A WHOLE EGG into our stand mixer WHILE IT WAS RUNNING and just lifted her hands and turned to me in horror. I stopped the mixer quick and fished out the shells as best I could, but there’s no coming back from that. My worst personal baking fail was pulling a pavlova out of the oven way too quickly. They’re so light, it flew off the parchment paper and splatted on the oven door. I salvaged the top half (thinnest pavlova ever) and kicked myself while cleaning up the mess.


If you had to pick only one type of sweet to eat for the rest of your life–what would you choose and why?

This is a really cruel question, but if I’m being forced to pick just one, I have to say chocolate. Then I could still have a variety of different chocolates. If I can only have one type of chocolate, I’m torn between Lindt truffles and Crunchie bars. I can’t usually find Crunchies in the US (we have such a sad lack of Cadbury), so last time I found them in Singapore, I bought an armful.


Which enchantment would you order if you were one of your heroine’s customers?

I would totally order my birthday cakes from Agatha’s Bakeshop! For a more daily treat, I’d go for the prosperity meringues. I loved the giant fresh meringues in all the corner bakeries when I was in Paris—they’re like a big, airy cookie! Plus, prosperity is a pretty safe choice—it gives a nice boost to all areas of your life without skewing too much toward any single area.


If DEADLY SWEET was a baked good, what would it be and why?

Deadly Sweet would be a crème brûlée! It’s sweet and comforting and leaves you scraping for more 😉 Lola Dodge is a compulsive traveler, baker, and procrastinator. She earned her BA in English from Stonehill College and MFA in Writing Popular Fiction from Seton Hill University–and hasn’t stopped moving since. When she’s not on the road, Lola spends her time indoors where the sunlight can’t melt her, writing or bingeing on anime and cherry soda. She can be summoned in a ritual involving curry, Hello Kitty idols, and a solid chocolate pentagram. 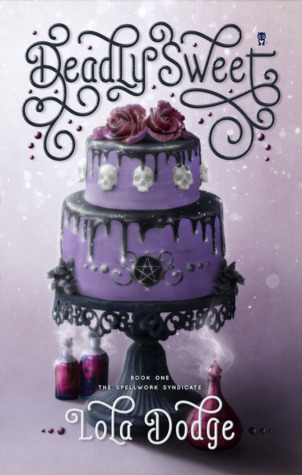 For fans of Hex Hall, The Magicians, Practical Magic, and Food Wars!

Anise Wise loves three things: baking, potion making, and reading her spellbooks in blissful silence. She might not be the most powerful witch, but enchantment is a rare skill, and her ability to bake with magic is even rarer. Too bad one wants witchcraft on their campus. Anise’s dream of attending pastry school crumbles with rejection letter after rejection letter.

Desperate to escape her dead-end future, Anise contacts the long-lost relative she’s not supposed to know about. Great Aunt Agatha owns the only magic bakery in the US, and she suddenly needs a new apprentice. Anise is so excited she books it to New Mexico without thinking to ask what happened to the last girl.

The Spellwork Syndicate rules the local witches in Taos, but as “accidents” turn into full-out attacks on Anise’s life, their promises to keep her safe are less and less reassuring. Her cranky bodyguard is doing his best, but it’s hard to fight back when she has no idea who’s the enemy. Or why she became their target.

If Anise can’t find and stop whoever wants her dead, she’ll be more toasted than a crème brûlée.

Who knew baking cakes could be so life or death?

One response to “Interview and Giveaway: Deadly Sweet by Lola Dodge (@Lola_Dodge, @XpressoTours)”