How Do You Make Butt Cracks & Plungers Sexy?

Yes! Well, to be honest with you, we didn’t try to get around those things at all: we embraced them! LOL. Okay, so yes, we made each one of the four love interests a virtual Adonis in the flesh with sculpted eight-pack abs, bulging biceps, tattoos, and tight firm buttocks definitely not covered in wiry hair … ahem. But really, we chose to embrace the beauty of their plumbing professions by using an excessive amount of plumbing metaphors—plunger for penis, O-ring for lady parts, storm drain for … um … wait, how PG is this post supposed to be?!

We would definitely classify “Elements of Mischief” as reverse harem/comedic paranormal romance, so if it something isn’t sexy … then it’s funny! For example, our main character Ari has a fetish for ‘plumber’s crack’, like when the jeans ride low and those sculpted butt cheeks start showing … We just made sure that the guys whose butts were on display were elemental shapeshifting dragons with bodies that didn’t quit. And then when that didn’t work, we made a joke out of it. Lots of jokes. Probably too many. We turned our story into a steamy, puntastic adventure of epic proportions.

What we didn’t expect was how much we’d fall in love with these characters. Yes, the guys are all four young start-ups who haven’t made a single cent in the plumbing business because the father of one of them has a monopoly on all supernatural plumbing jobs buuuuut, that doesn’t mean they can’t be complex, unique individuals who are way too good at snaking the main character’s drain for their own good. Just because they clean Arizona’s pipes in more ways than one doesn’t mean there isn’t a harrowing plot, plenty of action (both kinds, bedroom and combative), or romances worth fighting for.

Oops. You get the point though, right? But hey, if it wasn’t for those pesky true roots that grew into Ari’s pipes, she’d have never called the boys, never had a harem of hot men, and never had showers with unlimited hot water. So, basically it’s a win on all counts! C.M. Stunich is a self-admitted bibliophile with a love for exotic teas and a whole host of characters who live full time inside the strange, swirling vortex of her thoughts. Some folks might call this crazy, but Caitlin Morgan doesn’t mind – especially considering she has to write biographies in the third person. Oh, and half the host of characters in her head are searing hot bad boys with dirty mouths and skillful hands (among other things). If being crazy means hanging out with them everyday, C.M. has decided to have herself committed.

She hates tapioca pudding, loves to binge on cheesy horror movies, and is a slave to many cats. When she’s not vacuuming fur off of her couch, C.M. can be found with her nose buried in a book or her eyes glued to a computer screen. She’s the author of over thirty novels – romance, new adult, fantasy, and young adult included. Please, come and join her inside her crazy. There’s a heck of a lot to do there.

Oh, and Caitlin loves to chat (incessantly), so feel free to e-mail her, send her a Facebook message, or put up smoke signals. She’s already looking forward to it. Tate James was born and raised in the Land of the Long White Cloud (New Zealand) but now lives in Australia with her husband, baby and furbaby.

She is a lover of books, red wine, cats and coffee and is not a morning person. She is a bit too sarcastic and swears too much for polite society and definitely tells too many dirty jokes. 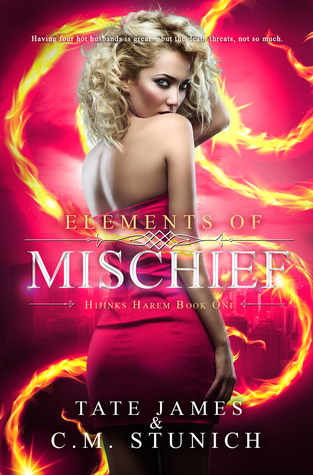 Four hunky, supernatural plumbers.
One reluctant, slightly drunk human.
A match made in heaven…or in the bathroom, rather.

My name is Arizona Smoke, and I’m the proud owner of a house haunted by my dead Gram, best friend to a cocktail dress loving werewolf, and apparent soul mate to four plumbers who also happen to be elemental dragons. Besides rippling pectorals, tattoos, and…uh, nice, long pipes, the guys also have control of the elements.

Supernatural law (whoever heard of such a thing anyway?) dictates that since I stumbled upon the guys in their alternate forms, I have to marry them. All four of them. Oh, and apparently one lousy (okay, awesome) night of sex means that I’m an elemental, too—and no amount of magical penicillin can cure this disease.

All I wanted was hot running water and toilets that flushed, but now I’m dealing with monsters lurking in the sewers, supernatural politics, and four penniless (but totally hot) plumbers living in my crumbling old Victorian.

I’m Ari Smoke, wine aficionado, ex-barista, and a girl who is completely out of her element.
Having four hot husbands is nice…but the death threats, not so much.

The sound of shattering glass echoed through the huge, empty kitchen as my wine slipped from my fingers and I choked over what I’d just heard. Clutching my phone to my ear, I took a breath before responding.

“It’s going to cost me how much?” I needed to clarify because surely I’d just heard him wrong.

“Seventeen thousand, ma’am. And to be honest, that’s a stretch. If we ran into any more unexpected problems along the way, that price would go up.” The man on the other end was so matter-of-fact about it. So uncaring that he was delivering such gut-wrenching news to me. “Look, I’m not going to fuck around on this. It’s a seriously old house, and no one has touched that plumbing practically since the day it was installed. I just don’t think I have the manpower to spare on a job like this right now.”

“But what am I supposed to do?” I hated the fact that my voice had just come out in a whimpering squeak, like a pathetic little girl. I was a tough bitch normally, but not having a toilet in the house was rough. For the last few days, I’d been walking three blocks to an antique store just to pee. “I can’t live here without any plumbing, and I already gave up my apartment …”

Of course this guy didn’t care about my problems. He didn’t care that my grandmother had just died and left me her crumbling Victorian mansion, or that I had just spent nearly every cent to my name on her funeral. Truth was, I would have had to give up my apartment regardless, because I no longer had any way to pay my rent since I was fired from my job at the local coffee shop. They simply hadn’t understood why I needed so much time off to care for my grandmother in her final weeks. It was kind of lucky, in that case, that Gram had left me this house or I really would have been out on the street.

“I’d usually tell you to sell it, but no one will buy it without working plumbing so you don’t really have a choice here, ma’am.” The man was still speaking, oblivious to my descent into desperation, and I sucked in a shaking breath, swiping the dampness off my cheeks with the back of my hand.

“Can you recommend anyone else?” I asked politely, but my voice shook like a leaf in a blizzard. There wasn’t anything quite so stressful as having toilets that didn’t flush. “I’m not from around here so I don’t know where else to find good plumbers.”

A long sigh came down the phone.

“Yeah, look, I’ll put in a good word for you with my son and his friends. They’re just starting out with their own business, so they’ve probably got the time free to take on a job like this. He might cut you a deal or a payment plan or something, but no guarantees. At least you’ll know he learned from the best.”

“Oh, god that would be … fucking incredible!” Relief flooded over me. This plumbing needed fixing, but I was flat broke. The next door neighbor’s tree roots had messed up all of the plumbing in Gram’s mansion, meaning none of the taps, toilets or anything was working. It had been years since Gram had done any maintenance whatsoever, so who knew how bad the damage was?

“Don’t thank me yet,” the man grunted, “these boys are known around these parts for having a bit of a wild streak. Personally, I wouldn’t hire them—even with my son involved—but you’re not exactly in a position to be picky so …”

“Uh, right.” Asshole, no need to rub it in. “So do you have a contact number for them?”

“No need. I’ll let them know about the job and they can get in touch with you.” He sounded a bit reluctant, like he was already regretting his suggestion. Hopefully not because of how big this job was? Or maybe he was worried about those famed wild streaks?

But please. Plumbers? How crazy could they be? I imagined them all in their late forties with big bellies and butt cracks covered in wiry hair. No, thank you. How much action could they really be getting?

“Thank you so much, sir. I really appreciate it,” I gushed politely. Never hurt to have manners. More flies with honey and all that … Or wait, flies were actually more attracted to shit, huh? Which is what I was going to be ankle-deep in if I didn’t get this plumbing fixed.

“Don’t thank me yet,” he muttered, then disconnected our call.

I eyed the mess of glass and liquid on the tiled floor, then shrugged to myself and grabbed the bottle. No one else was here to judge me. Swigging straight from the bottle, I headed back into the living room to watch Pretty Little Liars, my guilty obsession.

Hey, it was better than the Maury Show, right?

But only by a little.