“What are your plans for the week?” Mateu asked me.
“Nothing much. Business has been slow, so I’m thinking of giving a class.” Usually I supplemented my income by giving classes in various forms of magic. I taught runes, potion making, and other activities. Sometimes it was struggle to keep things afloat and earn enough to pay for rent, but my store served a purpose in the community and I enjoyed the work. I also liked being in charge of my own work hours. Like many of the other specialty stores in El Born, I opened and closed my store whenever I wanted. And my customers were okay with it. Most of them had my phone number and I left a note on the door for those who didn’t. If I was nearby, I could return to the store and help them with what they needed.
“Do you want me to tell the other gargoyles to talk up your services? Give you a small marketing push?”
I shook my head. “No, that’s okay, I kind of need this week to prepare. I have a speaker visiting the store next week. It’s going to require a lot of coordination and work. I’ve told the local covens but I’m going to have to send out reminders.”
“Whatever you like. If you change your mind, let me know.” Mateu returned to people-watching.
To drum up work and business, I had put together a little event for witches and wizards. I had invited many of the nearby covens to sign up. I had ordered a lot of inventory and had to send out a newsletter letting them know what was in the store. I hoped that would help increase sales.
“In fact…” My voice trailed off. Mateu’s shoulders had stiffened and his body was on alert as he stared out the window. I tensed. “What’s wrong?”
“Come over here,” Mateu said, still focused on whatever he saw outside the window. I walked around the counter and made my way to him. He got to his feet and stared intently at the street. As soon as I was within arm’s length of him, he asked me, “Do you see that woman?”
“Which one?” I searched among the people outside the store. Locals walked past us going about their daily lives while tourists gawked at everything they saw. Across the street was a larger group of tourists. They were focused on the tour guide who held a cane and pointed at various landmarks around them.
“The one in the red T-shirt. She’s part of the group.”
I resumed my search and spotted the woman he was talking about. She stood across the street, her body turned away from us. She gestured at the same buildings the tour guide did and talked to her companion who appeared to be bored from the restless way her head darted around looking at anything but the building in question.
“Yes? What about her?” Before the words had left my mouth, the woman turned slightly towards us and I immediately saw the problem.
A mark over her eye pulsed with a faint blue glow.
“Do you think she knows someone’s cast a spell on her?” Mateu asked me. Devyn Jayse is the author of the Dare Valari and Magic Runes series. 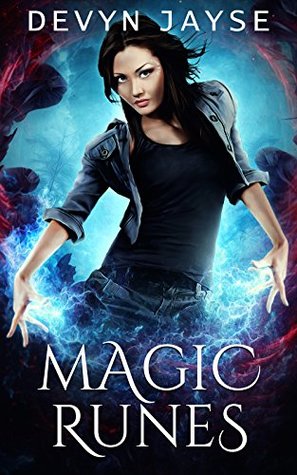 Meet Carmen Rebello – Rune Witch, owner of the best magic store in Barcelona, and black sheep of her family.

When Carmen successfully removes a spell from a bewitched human, she never thought she would get ensnared in an ongoing Supernatural Bureau of Investigation case. Her life is already complicated by trying to stay hidden from her powerful family members, Carmen can’t afford the attention of joining the investigation but the SBI insist on her involvement. Add an annoying (but hot) SBI agent and her life is getting more difficult by the day. Can she help the SBI without exposing her identity?

One response to “Excerpt and Giveaway: Magic Runes by Devyn Jayse (@DevynJayse, @XpressoTours)”