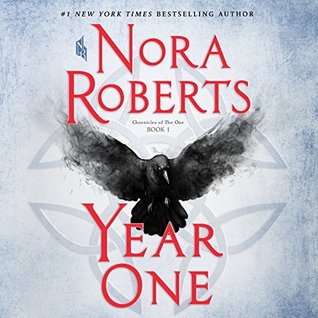 It began on New Year’s Eve.

The sickness came on suddenly, and spread quickly. The fear spread even faster. Within weeks, everything people counted on began to fail them. The electrical grid sputtered; law and government collapsed—and more than half of the world’s population was decimated.

Where there had been order, there was now chaos. And as the power of science and technology receded, magic rose up in its place. Some of it is good, like the witchcraft worked by Lana Bingham, practicing in the loft apartment she shares with her lover, Max. Some of it is unimaginably evil, and it can lurk anywhere, around a corner, in fetid tunnels beneath the river—or in the ones you know and love the most.

As word spreads that neither the immune nor the gifted are safe from the authorities who patrol the ravaged streets, and with nothing left to count on but each other, Lana and Max make their way out of a wrecked New York City. At the same time, other travelers are heading west too, into a new frontier. Chuck, a tech genius trying to hack his way through a world gone offline. Arlys, a journalist who has lost her audience but uses pen and paper to record the truth. Fred, her young colleague, possessed of burgeoning abilities and an optimism that seems out of place in this bleak landscape. And Rachel and Jonah, a resourceful doctor and a paramedic who fend off despair with their determination to keep a young mother and three infants in their care alive.

In a world of survivors where every stranger encountered could be either a savage or a savior, none of them knows exactly where they are heading, or why. But a purpose awaits them that will shape their lives and the lives of all those who remain.

The end has come. The beginning comes next


Book hangover? That would be right now for me. I keep thinking I should go listen some more, only to realize I am done. I even had another review already started, but decided to go with this when I realized how fast I was listening.

When a global pandemic strikes and takes out most of the human population, the living have their work of surviving cut out for them. Survival of the fittest? Not necessarily, as the deadly virus is indiscriminate. That being said, if a person has magic inside them-either previously known about or not-than they are probably still among the living. This magic can be good or very very bad. There’s also a group of regular people that think any magic users, even the good, should be killed on sight. Balancing that are the regular people that work hand in hand with the good magic users to make a new world.

I loved how the author took several groups of people from different places in NYC and showed their struggle from the early days of the plague separately, until they all(mostly) eventually end up together. There’s Lana and her live in boyfriend, Max, who are witch practitioners in New York City. Neither one of them was that gifted before the virus, but after, their skills were off the charts. Then there’s Arlys, a news anchor from a major television station in NYC. Fred is an intern that works at the station with Arlys. While Arlys is attractive, tenacious, and driven to keep people informed, Fred is flighty with a fun personality, and her own dose of magic. Jonah is a paramedic that can see death before it happens. During the pandemic, he sees it everywhere in the people he tries to help. Rachel is a doctor at the hospital ER where he brings patient zero. All of these characters, and more, decide to leave NYC because it is becoming dangerous and is full of the black magic users. Each has a harrowing story of what they go through.

Fascinating. A good word to describe how I felt about each person’s story and how they end up together. I was on the edge of my chair, on and off, throughout the listen. So much drama, action, and life and death moments! But not only that, Roberts shows her audience, the good that comes at times, the friendships or relationships formed, and the community of people all working together for a common goal. Survival. But just like in the real world, there are those that go against the good in order to cause harm. Magic users of every type just ramped everything up to another level.

I am trying to stay away from spoilers, so I won’t say anything else about the actual story. I will say that hopefully you don’t care about how you will probably drop everything else while reading or listening to this. I literally could not quit listening unless I absolutely had to, and then I just wanted to get back to it.

Narration by Julia Whelan was fantastic and I realized early on that I had listened to her before because of how distinctive her voice is. The male voices she uses made me think I was actually listening to a man. Of course, I give her narration 5 stars as well and actually highly recommend listening to the story as it was so well done.

FYI-If you are expecting a Nora Roberts romance, this isn’t it. There is some romance, but not a lot.