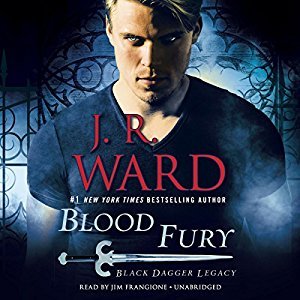 In this sexy paranormal romance novel set in the world of the Black Dagger Brotherhood, number-one New York Times best-selling author J. R. Ward tells the story of two couples - both fighting to find love in the midst of the war with the Lessening Society.

A vampire aristocrat, Peyton is well aware of his duty to his bloodline: mate with an appropriate female of his class and carry on his family's traditions. And he thought he'd found his perfect match - until she fell in love with someone else. Yet when his split-second decision in a battle with the enemy endangers the life of another trainee, Peyton has to face the idea that his future, and his heart, actually lie with another.

Novo, as a female in the Black Dagger Brotherhood's training program, feels like she has to prove herself to everybody - and she has no interest in being distracted by falling in love. But when Peyton proves to be so much more than a rich playboy, she is forced to confront the tragedy that has broken her soul and closed her off from love.


Even though I quit reading the Black Dagger Brotherhood after Lover at Last-which by the way was amazing-I haven’t had any trouble with the various storylines in this spin off series, Black Dagger Legacy. I don’t really consider it a spin off because it takes place in the same world, and still features members of the original brothers, although now it’s mostly about the trainees for Black Dagger Brotherhood status. Three books in, these have all been about the same class of trainees, making for a deeper connection to all those characters. I was especially excited to learn that lawyer Saxton, ex-boyfriend of Qhuinn, would finally meet his match after all his heartbreak.

Trainee Peyton is a mess. He’s in love with Paradise, even though she is already mated to another trainee. On Paradise’s part, she thinks of Peyton as her best friend. All three are in the program. Also in the program is Novo, a strong and very fierce female warrior. She has had her own heartbreak in the past, although that past isn’t that far gone. Saxton is suffering. He’s in his own private hell-working for the King and running into his ex, Blay, at every turn. When an elderly vampire, Minnie, begins having problems with a developmental company that wants her home, Saxton steps in to help. Bitty’s Uncle Ruhn, fairly new to the series, is sent with Saxton as a sort of bodyguard. For those that don’t remember, Bitty is the little girl that Rhage and his mate adopted.

While this has life and death moments and one really bad run in with the Lessers, it’s the characters that made this story for me. All were familiar to me going into it, so I was ready for their stories. Peyton is the son of wealth and he has the resulting drug habit and sleeping around down to a tee. With his admittance into the BDB program, he is now starting to change his ways. Trying at least. But he is hurting about Paradise and when she comes into danger one night, he reacts the way a bonded male would. This causes all sorts of problems, but it also manages to put Novo more on his radar than ever before. Novo was such a strong female and she has held in all her heartache for awhile now. We learn her background story and personally I can understand wanting to punch someone from her past. Saxton was so sweet when he starts falling in love. The book is worth it just for the story of him and Ruhn. Oh, they have some problems to overcome and actually one really big hurdle, but their story was probably my favorite of the two couples. I came away loving both of them, and actually would have loved a book with just them in it. I hope we see more of this couple in future installments. Minnie, the owner of the home in jeopardy, was a sweetheart and the kind of person I would love to know. And then there were the villains and this story had them. They were not necessarily fleshed out because while important to the story, their backgrounds, etc. were not important. Enough said about that.

Narration? I liked Jim Frangione and have liked him narrating others in this series as well. This time I realized that he doesn’t do that much to differentiate voices. Saxton was the exception to this and I knew immediately when he was speaking. Frangione’s voice is lighter when females are speaking and I appreciated that, but I was just wishing for more voice difference. I noticed it more with this one than previous ones I’ve listened to. Narration was still 4 stars for me because I do like his voice.

All in all, this was an excellent listen. As always, Ward delivered a well written and paced adult story that kept me listening late into the night. I hate that we will have to wait so long for the next one as it has been at least a year or longer between each one.