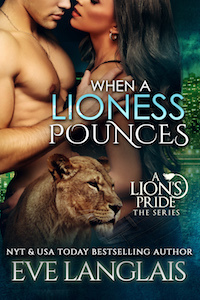 There's a new guy in town, a mysterious and domineering man with secrets.

I like secrets. Reba especially loves swatting at them until they spill their guts--sometimes quite literally.

But Gaston isn't swayed by her sensual allure.

This slick club owner is very much intrigued by the cocoa-skinned beauty, but he doesn't dare show too much interest lest his enemies notice.

As if Reba cares about danger. This lioness thrives on action and a bit of violence, and she knows how to do it with class. She's ready to strap on her heels, gloss her lips, and go to battle.

Watch out because, once she's got you in her sights, she's not afraid to pounce.

Another fun installment in Eve Langlais’ A Lion’s Pride series. This series has mostly focused on shifters, though there have been other supernatural creatures in it. In this one, we have Gaston Charlemagne. He is a local club owner, but the pride really doesn’t know what he is or what he can do. Reba, one of the pride’s lionesses, goes to spend some time at the club to try and figure him out.

Reba is a fun and strong female lead to this story. She is sassy and has no shame. This is mostly true for all the female leads of this series, but Reba is still one of my favorites. I just love the lines that she has.

This book is full of romance, action and fight scenes that include everything from zombies, gholem and an evil ex-fiancee. And since this is an Eve Langlais book, you know it is full of laughs too. No Eve book is complete without them.

As per my usual with an Eve Langlais book, the hardest part of writing the review is narrowing down the quotes from the book that I want to use. There are just so many fun ones.

While many cultures depicted the male as the defender and warrior, lions were different. With them, the females took the active role, hunting and protecting. A lion was a fierce thing, but also a bit lazy. He roused himself for only the big issues. Whereas the lionesses, they made small issues into big issues just for the hell of it. Or so Gaston had learned recently when he investigated them.

The mission came with a few rules from Arik—number one was don’t start any fights. Number two was the same as number one. And number three was no sex with Charlemagne or his staff. Unless necessary—she added that last part since Arik surely forgot. Reba would take one for the team if needed.

Their resident geek, Melly—who religiously watched every Walking Dead episode—hopped up and clapped her hands excitedly.
“OHMYGODTHEZOMBIEAPOCALYPSEISHERE. I’m ready for you, Daryl.” She ran out of the restaurant shrieking in excitement, probably off to get dressed in her zombie fighting gear.

20 responses to “Review: When a Lioness Pounces by Eve Langlais (@mlsimmons, @EveLanglais)”