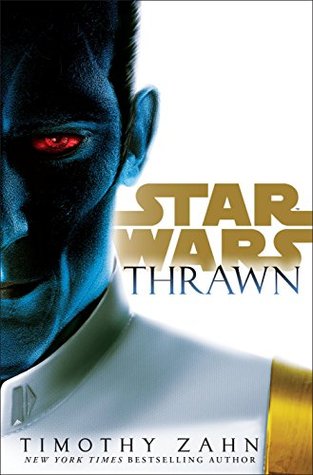 One of the most cunning and ruthless warriors in the history of the Galactic Empire, Grand Admiral Thrawn is also one of the most captivating characters in the Star Wars universe, from his introduction in bestselling author Timothy Zahn’s classic Heir to the Empire through his continuing adventures in Dark Force Rising, The Last Command, and beyond. But Thrawn’s origins and the story of his rise in the Imperial ranks have remained mysterious. Now, in Star Wars: Thrawn, Timothy Zahn chronicles the fateful events that launched the blue-skinned, red-eyed master of military strategy and lethal warfare into the highest realms of power—and infamy.

After Thrawn is rescued from exile by Imperial soldiers, his deadly ingenuity and keen tactical abilities swiftly capture the attention of Emperor Palpatine. And just as quickly, Thrawn proves to be as indispensable to the Empire as he is ambitious; as devoted as its most loyal servant, Darth Vader; and a brilliant warrior never to be underestimated. On missions to rout smugglers, snare spies, and defeat pirates, he triumphs time and again—even as his renegade methods infuriate superiors while inspiring ever greater admiration from the Empire. As one promotion follows another in his rapid ascension to greater power, he schools his trusted aide, Ensign Eli Vanto, in the arts of combat and leadership, and the secrets of claiming victory. But even though Thrawn dominates the battlefield, he has much to learn in the arena of politics, where ruthless administrator Arihnda Pryce holds the power to be a potent ally or a brutal enemy.

All these lessons will be put to the ultimate test when Thrawn rises to admiral and must pit all the knowledge, instincts, and battle forces at his command against an insurgent uprising that threatens not only innocent lives but also the Empire’s grip on the galaxy—and his own carefully laid plans for future ascendancy.

After finishing Chuck Wendig’s AFTERMATH trilogy, I tried to settle in to several non-STAR WARS books, but after a few lackluster beginnings that were all unceremoniously set aside, I surrendered to my fate and indulged my recent obsession with THRAWN.

I didn’t know what to expect, having never heard of the character, but it was well received by readers, and if a character is so badass that his name is the only title needed . . . I was okay with lack of prior knowledge (which worked out just fine, FYI).

Something is picking off the members of the group.

The way it’s presented is horrifying.

So imagine my surprise when an officer discovers that the wraith responsible for the deaths of so many of his drones has stowed away on one of the Imperial vessels, and rather than destroying the culprit in a hail of laser fire, questions and ultimately delivers him to the Emperor himself.

Thrawn is a Chiss, a member of an alien race so feared and respected that it exists only in legend. Or so Eli Banto, a student of one of the Imperial academies thought, but he recognized Thrawn for what he was immediately, and being the only one present capable of communicating with the Chiss, he finds his life upended when he gets assigned as Thrawn’s translater and guide.

The Emperor is intrigued by Thrawn, you see, and enrolls him into the Imperial academy on Coruscant, transferring Eli with him, the equivalent of a semester away from Eli’s intended graduation.

THRAWN is the story of them both, alternating primarily between their POVs.

Zahn did an excellent job of illustrating the alienness of Thrawn’s mind. Not only are his senses hightened, but he uses them to analyze and categorize the humans that surround with surprising insight. It’s as unsettling as it is captivating.

In contrast, Eli is wholly human, albeit a decent human as far as humans go, and his perspective keeps the bizarreness of Thrawn’s from becoming overwhelming.

Beyond the likability of these main characters, THRAWN is ultimately an underdog story and who doesn’t love a good underdog?

SO. If you also love STAR WARS and and underdogs, I highly recommend this recent(ish) addition to the canon. If you’re anything like me, you’ll be chomping at the bit for more information about this blue-skinned, red-eyed alien and his legendary people.