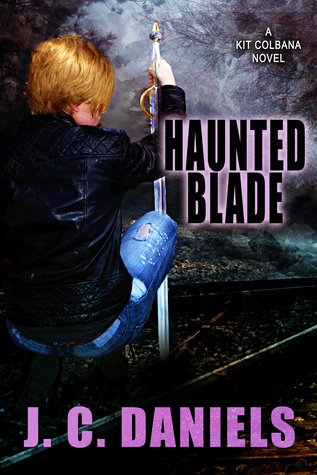 Never let it be said that Kit Colbana had ever been given the easy road. Or even the semi-paved road. Only weeks after dealing with the mysterious—and murderous—being called Puck, she’s got another killer on her hands. Perhaps even two.

Some of the bodies turning up bring up haunting memories of a past she longs to forget, but as always, that past is chasing her at her heels, like a hated shadow.

As the body count racks up, there’s an imbalance of power, particularly among the vampire population, and Kit must yet again deal with ugly memories as one of the monsters who tried to break her is set free to deal with the imbalance of power. Yet while a power struggle rages in East Orlando, there’s another, more subtle battle taking place and Kit feels like the center of it all.

Arrogant? Maybe. But the dead bodies don’t bear the mark of her grandmother’s pet killer by sheer coincidence…and she doubts her nemesis being released is either.

This review is really hard for me to write. This is a series that I’ve followed and loved since book one, Blade Song, which I read back in 2012. Kit Colbana was a kickass heroine that fans of Kate Daniels would really love. Kit is a unique character. She is half Aneria, a race descended from the Amazons and half human. Her mother died when she is young. Her grandmother raises her, but sees Kit as her mother’s downfall. She frequently has Kit beaten and starved.

Anyway, Kit escapes. She moves to Orlando, which has a large NH, or non-human, population. She quickly befriends many of the different supernatural creatures. She’s friends with shifters and witches. Independents quickly learn to trust her. She works with some of the vampires, though they are a tough group to get along with. There are also fae and others.

The first four books in this series, I really loved (though book four has a huge cliffhanger). I even listed it in one review as, “most underrated urban fantasy series”. Then book five came out. I wasn’t able to get a ARC of book five, so I grabbed it on release day from Amazon. I quickly started to read it and was very disappointed in the editing. There were issues everywhere and the first two-ish chapters were very confusing. Overall, I still enjoyed the story, though the editing issues drew me out of the story.

I was able to get an ARC from NetGalley for this book and quickly started it. However, I quickly noticed a bunch of editing issues.

Damon dropped a kiss on top of my and I could feel his amusement.

They’d been doing to me more and more lately.

But this is an unfinished ARC. So I decided to go and buy the book. I was so hoping that it would be better. And it was. I looked at the two issues mentioned above and they were both fixed (there were several others, I just listed these as examples). However, there are still several issues.

For instance, there is a scene where Kit is going to talk to some witches about this really big thing. Witches from all the groups were there and even some independent witches were there. They were all gathering to hear her tell them about it. There is this big build up and then nothing happens. The speech is over and she’s leaving.

As he swung around to face the group, I swallowed my shock and smoothed out my features.
That was a story I wasn’t sure I wanted to know.
I guess we all had issues.

Then it was over. Nothing about her talking to them. Really nothing about their reactions. There was this whole thing with her threatening the shifters that they were going to have to help. Nothing here about that. Just move on with the story.

There are also a few of the editing issues that I mentioned before that weren’t fixed in the copy that I bought. Nothing as bad as the ARC, but I just kept finding myself rereading sections to make sure i was reading it right.

It makes me sad to write this review. It makes me even sadder that I couldn’t finish the book. I made it all the way to 40%, but I just couldn’t get myself to keep going. I kept putting it off and that was when I knew it was time. Letting the book sit isn’t going to help it or me. This isn’t just a mood thing, which happens.

I do still highly recommend the first three books in this series. The second book is truly amazing. While, I enjoyed the fourth book there is a big cliffhanger and since I wouldn’t recommend the fifth book, it might be best to not attempt the fourth. Maybe the author has updated it, but after reading this one, I don’t know.