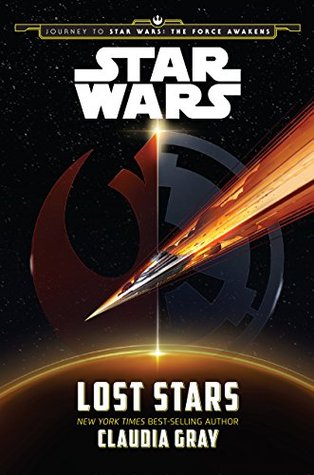 This thrilling Young Adult novel gives readers a macro view of some of the most important events in the Star Wars universe, from the rise of the Rebellion to the fall of the Empire. Readers will experience these major moments through the eyes of two childhood friends--Ciena Ree and Thane Kyrell--who have grown up to become an Imperial officer and a Rebel pilot. Now on opposite sides of the war, will these two star-crossed lovers reunite, or will duty tear them--and the galaxy--apart? Star Wars: Lost Stars also includes all-new post- Star Wars: Return of the Jedi content, as well as hints and clues about the upcoming film Star Wars: The Force Awakens, making this a must-read for all Star Wars fans.

On the one hand, I’m kind of glad that I found this installment of the STAR WARS canon to be so completely mediocre: it proves I’m not some maniacal fangirl that loves all-the-things without regard to factors like relevance or lack of ingenuity.

LOST STARS is the (love) story of Thane Kyrell and Ciena Ree, two very different people (in an extremely ordinary way) from the outer rim of the Empire. Thane is the proverbial rich kid, and Ciena is the girl from the valley (heh).

They both want to fly more than anything.

Beyond the lackluster romance, LOST STARS did nothing to further the STAR WARS story. It covered the events from the original trilogy, albeit from the perspective of Imperials rather than rebels, but still . . . Not a single revelation.

The main theme seemed to be: the Empire is Bad.

I might have found Ciena’s unique cultural perspective interesting, if I didn’t also find it obdurately prideful—I have no use for people who don’t recognize that rules only work so long as everyone follows them. You gots to roll with the punches, Dollface.

Thane I could relate to, but in a generic damn-the-man kind of way, so meh.

The secondary characters were pretty MEH as well, mostly from lack of development. Of Thane’s two roommates, one transformed into an Imperial zealot as a coping mechanism, and the other vanished after graduation beyond a brief nod to some apparently clever engineering.

Ciena’s friends had more potential, but one View Spoiler »died in the destruction of the first Death Star « Hide Spoiler, and the other was woefully neglected.

The characters weren’t the only area that lacked development: why exactly did Thane’s family loathe him? At one point, Thane himself muses that being born was his unpardonable sin, but that merely highlighted the lack of illumination on the subject. But the kind of alternate neglect and abuse he suffered at his family’s hands isn’t arbitrary . . . So what’s the deal?

Maybe Gray left it a mystery so she could address it in the follow up novel that the final chapters of LOST STAR seemed to be setting up, but no such sequel appears to be in the works.

Verdict: PASS. Unless you like YA romance and can appreciate cultural differences without being frustrated by them, in which case, go for it.

One response to “Review: Lost Stars by Claudia Gray”