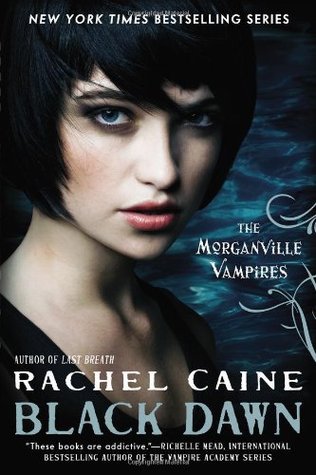 With its eclectic mix of vampire and human citizens, Morganville, Texas, has always been a risky place to call home. But with the invasion of the vampire’s deadliest enemy, Morganville isn’t just in danger—it’s dying…

Ever since the draug—mysterious creatures that prey on vampires—took over Morganville, the lives of student Claire Danvers and her friends have been thrown into turmoil. Most of the town’s residents have evacuated, but Claire, Shane, Eve and Michael have chosen to stay and fight.

Using the city’s water system to spread, the draug have rapidly multiplied. Things in Morganville look grim, especially since vampire Amelie—the town founder—has been infected by the master draug’s bite. Now, if Claire and her friends don’t figure out how to cure Amelie and defeat the draug, it looks like Morganville will become little more than a ghost town…

I have been in a bit of a book slump when it comes to paranormal books lately and I really needed to get over it. The best thing I could think of to do was to go back to a tried and true series and that’s exactly what I did. I can’t believe it’s been almost two years since I last visited Morganville and I was more than ready to jump back in. Happily, it was an excellent decision.

Morganville Texas is the home to a large group of vampires and the human’s that substain them. Pretty scary concept huh? The town also boasts a college that does not sustain the vampires and Claire started her college life there at the tender age of sixteen. Now almost eighteen, she’s survived way more than her share of murder, mayhem, and downright scary stuff. She’s been through the wringer and still keeps fighting. Claire lives with her three roommates off-campus-big mistake on her part number one-and beginning with this book, they are now staying at the vampire stronghold while the rest of the town suffers at the hands of the only real enemy of the vampires, the Draug. Draugs are water based creatures, meaning not only do they live in water, they are also made up of a hideous watery concoction. They can live off human blood, but it’s vampire blood that they crave. In Last Breath, the previous book, something bad happens to Amelie(the vampire queen)and everyone is still reeling from that. Eve and her fiance, Michael(also a vampire)are having a rough time due to previous events. Claire and Shane are still in love and working hard along with the vampires to dispel the threat of the draug.

Pretty early on, I fell completely in love with the main characters of Claire, Shane, Michael, and Eve. That has never changed from one book to the next. They are all roommates, best of friends, and now are two couples. I’ve loved following their romances and all the problems that are bound to happen in a town full of vampires. A town that no one can escape from. Side characters of Amelie and Oliver, as the two top vampires, were well fleshed out, and while I dislike Oliver, I do care about Amelie, at least a little. As the queen, she rules all the vampires and is ultimately responsible for all of Morganville’s inhabitants. She was also Claire’s benefactor for a lot of the books. That, however, doesn’t mean that Amelie is nice. She’s very ancient and most are afraid of her, but Claire is never shy about standing up to her. But then, Claire is feisty as the day is long. Being a science prodigy doesn’t hurt either. So many other characters are important to the story as well. Most of them feel like people I know by now, twelve books in.

The last book, this book, and presumably the next book, are all continuing story lines. And that’s because the draug threat is major and not something that could be handled in one book. But if you start this series, it’s not like that in all the books. Because of these continuing story lines, I really don’t want to tell that much about what happens, so I won’t.

I recommend that you start with book one, Glass House. If you are like me, you will be hooked pretty much immediately. Rachel Caine has an amazing imagination and it certainly shows in her books. Her writing is very intricately plotted, detailed, and paced, making reading them in order a must. Her world building, and characterizations are nothing short of fantastic. These started out as young adult, but fairly quickly became closer to new adult, but nothing explicit. Highly recommended to ages 16 plus. As far as my reading slump goes, I’ve already bought the next one on audio.