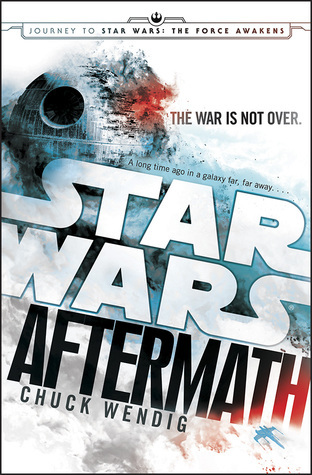 Journey to The Force Awakens.

The second Death Star is destroyed. The Emperor and his powerful enforcer, Darth Vader, are rumored to be dead. The Galactic Empire is in chaos.

Across the galaxy, some systems celebrate, while in others Imperial factions tighten their grip. Optimism and fear reign side by side.

And while the Rebel Alliance engages the fractured forces of the Empire, a lone Rebel scout uncovers a secret Imperial meeting. . . .

Before we get started:

1. I am not an expert on the subject of STAR WARS novels.

This is in fact my first STAR WARS novel, so on the subject of canon, I got nuthin’. #blankslate

2. I am not a Chuck Wendig expert.

This is in fact my first Chuck Wendig novel (that I finished).

I mention these things b/c if you scan the reviews on Goodreads, most of the reviewers are one or both of those things, and many of them did not love AFTERMATH.

The only thing I can say in reference to Chuck Wendig’s other books is that I tried to read BLACKBIRDS, but it was too dark, too crass, and I called it quits a few chapters in.

So if you had a similar experience, this one is a whole different animal.

In the trilogy meant to be the bridge between the original films and THE FORCE AWAKENS, we meet a new cast of characters while still getting a healthy dose of our longtime favorites.

As is typical in a first installment, AFTERMATH lays a lot of groundwork. The majority of the book is spent in alternate viewpoints, winding ever closer toward each other, which is not my favorite, but Wendig kept the POVs entertaining enough that I didn’t mind too much. And in any case, by the time we finally hit the gang’s-all-here portion, I was wholly invested.

Now I want to talk about Sinjir.

I’ve followed Wendig’s blog since Dragon Con 2015 when he made me laugh so hard in a storytelling improv panel that I thought I was going to puke, so I knew about the controversy going into it. I didn’t know which character had caused the fuss, but I knew there was one.

My newsfeed is currently spitting out all kinds of stuff about Prince Harry and Meghan Markle, most of it fluff, but some of it is . . . Upsetting. Like the one that quoted a tweet from The Daily Mail promoting a story on Markle that read, “from slaves to royalty.”

NBC News called this a “quiet brand of racism.”

Similarly, the majority of the SW fandom claims not to have an issue with homosexuality, they just object to needless gayness: if you’re going to have a gay character, it needs to fulfill some greater purpose. Just throwing gay people in willy nilly is unnecessary, or worse, political.

Don’t use STAR WARS canon to soapbox your cause, sir.

And personally, Sinjir was my favorite character. B/c hilarious combination of narcissism and snark.

There’s also a True Believer for a villain, a self-serving bounty hunter who might not be as hardcore as she thinks she is, and a teenager who programmed his soldier droid using combat training and dance festivals.