Welcome to Rabid Reads’ the LAST tour stop of 2017! We’re sharing a cute excerpt from PURRFECT SANTA by Jessie Lane and Chasity Bowlin. You can grab the whole novella for only $0.99 for a limited time, so don’t forget to visit your favourite eBook store after you’ve wet your whistle with chapter 1. Chasity Bowlin lives in central Kentucky with her husband and their menagerie of animals. She loves writing, loves traveling and enjoys incorporating tidbits of her actual vacations into her books. She is an avid Anglophile, loving all things British, but specifically all things Regency. She also writes steamy contemporary and paranormal romance.

Growing up in Tennessee, spending as much time as possible with her doting grandparents, soap operas were a part of her daily existence, followed by back to back episodes of Scooby Doo. Her path to becoming a romance novelist was set when, rather than simply have her Barbie dolls cruise around in a pink convertible, they time traveled, hosted lavish dinner parties and one even had an evil twin locked in the attic. Jessie Lane is a best-selling author of Paranormal and Contemporary Romance, as well as, Upper YA Paranormal Romance/Fantasy.

She lives in Kentucky with her two little Rock Chicks in-the-making and her over protective alpha husband that she’s pretty sure is a latent grizzly bear shifter. She has a passionate love for reading and writing naughty romance, cliff hanging suspense, and out-of-this-world characters that demand your attention, or threaten to slap you around until you do pay attention to them.

She’s also a proud member of the Romance Writers of America (RWA). 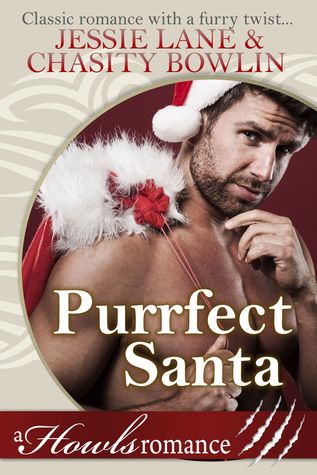 A woman afraid to love …

Nikki knows what it is to lose those you love. With her focus on her orphaned sister, she hasn’t given herself the chance to process her own grief over the loss of their parents. Life is chaos and the last complication she needs is a mate.

A lion alone for too long …

Joe Miller knows chaos. Being orphaned as a child, he’s never had a family to call his own. Crashing with a friend for the holidays, he’s hoodwinked into playing Santa Claus at a local mall. The last thing on his mind is finding a mate.

A love worth the risk …

With her baby sister on her hip, sadness in her eyes, and a longing in her heart, Nikki waits in line with her sister to see Santa. From the moment he scents her, Joe is in deep. It’s going to take everything he has to convince Nikki the love outweighs the risk to her heart. Luckily for Joe, he has fate and Nikki’s adorable baby sister on his side. After all, who can say no to the Purrfect Santa at Christmas?