Today I have a real treat for ya! Sierra Cross is sharing an excerpt from BLAZE, the fourth installment in her Spelldrift: Coven of Fire series. You can also one-click book 1 for only $0.99, and test your luck in one (or both) of the two giveaways!

“I’m sorry, Director,” I said. “Something’s come up. I’m afraid I can’t get on that plane.”
Bonaventura spun and sucked in a breath in that almost soundless way only a vampire could. He’d already thought I was a flaky amateur, now he probably thought I was a nutcase. Even Matt and Asher were looking at me like I’d lost my mind. I could really see how it might look that way.
Didn’t matter. Callie was my coven sister, and she needed us to save her. Family first.
“So am I to understand,” Bonaventura’s voice dripped with condescension, “that after begging me to help with the amulet, insisting you be present when Tenebris is killed, you’re now refusing to accompany me?”
“Believe me, if it weren’t absolutely necessary, I wouldn’t do this.” My magic was begging to come to my fingertips. But starting a brawl with a vampire seemed like one of those “poor life choices” they’d warned me about in middle school.
Bonaventura composed himself with a smooth exhalation, then turned to Liv. “I suppose you’ll have to do.” Another finger-snap. “Let’s go.”
“It’s a coven matter that has come up,” Liv said. “None of us can go.”
“We’ll send you the deactivation spell,” I said, not caring in the least that I was giving up the only leverage we had with the Director.
If Bonaventura could’ve killed me with a look, I’d be bleeding out right now. I’d seen what he’d done to Wes, his own son. I got the feeling he was picturing doing worse to me. “Not an option, Ms. Hill.” The terminal dropped ten degrees in an instant. “One of you two witches will board the plane. Or I will release you from your pitiful existence.”
Strange what a difference a little blood could make. More than scaring me, those words hurt. I’d disappointed him. I took a deep breath and shrugged off his compulsion. Vampire mind tricks aside, I owed no loyalty to Bonaventura. And as badly as I wanted to take Tenebris down, I needed to do this more. “If you want to try,” I said, “have at it.”
Matt, Liv, and Asher had already flanked me, ready to fight at my side even if they didn’t fully understand. Bonaventura’s crew did the same for him. The Director narrowed his eyes, looking at each of us in turn. I couldn’t decipher the calculations he was making behind those ice blue eyes. “Know this, witch—and this goes for your whole coven—when our paths cross again it will not be a friendly encounter.”
My heart was racing. Did I really want to make the director of the Council Suprema my enemy? But what choice did I have? We had to follow up on that phone call. We had to find my coven sister. “If that’s how you want to play it.” I hoped there’d be a way to make things right with Bonaventura later.
The Director turned on his heel and all the other vampires followed suit. I watched as they disappeared through the gate door.
“Alix, luv.” Asher turned to me, his voice sweet as saccharine. “Be so kind as to tell me why I just voluntarily incurred the wrath of the one of most powerful vampires in the northern hemisphere?” 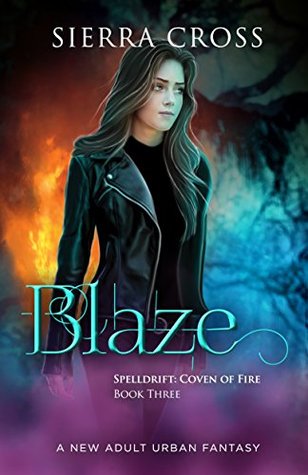 The demon is still out there.

Tenebris—the monster who killed my parents, violated my mind, and destroyed my coven sister Callie—has gone into deep hiding. I won’t rest until I find him and personally take him down.

Luckily the vampires have a bead on him, and they want me along for the demon-hunting ride. But with his brand new skinsuit and the magic amulet he stole from a witch, Tenebris is more powerful than ever. I’m not dumb enough to go up against my mortal enemy without the Coven of Fire at my side. The vampires, however, flat-out refuse to let my “non-traditional” coven in on the job. It seems that no one in the magicborn community respects us, no matter how many lives we save or how many sacrifices we make.

Callie was one sacrifice too many.

So screw the vampires. Forget working within a system that won’t accept us. Matt, Asher, Liv, and I may be misfits, but we’re a coven. And our coven is not complete without Callie. Somehow, we’ve got to track her down and find a way to save her. Then, we’re going to avenge our loved ones and take down Tenebris once and for all…but we’ll do it as a coven. As a family. One witch for all and all for one, no magicborn left behind. Spells and skyscrapers. Warriors and warlocks. Coven secrets and forbidden romances. Sierra Cross lives for urban fantasy, for modern magic and the bold supernatural beings who stalk our contemporary world. Her Spelldrift universe stars kickass witches and their heroic guardians, as well as vampires, shifters, mages, Fidei, and the dark demonic forces that threaten them all. Every day of the blitz, Enigmatic Books is giving away FIVE free e-copies of the Spelldrift Coven of Fire Books 1-3 bundle on their Facebook page. Enter HERE➔ http://www.facebook.com/enigmaticbooks/