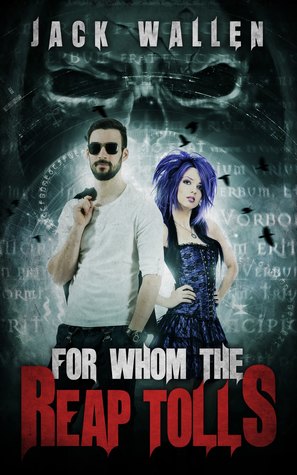 A Reaper’s job is never done!

The Scythe has been eradicated. Now it’s time for Grim and company to enjoy much-needed rest, pizza, and romance. Thing is, Death has darker plans and deep-seated secrets to reveal.

With the help of a bookstore dedicated to all things occult, Grim uncovers a truth that could very well set him at odds with Fate and send the natural order spiraling into chaos.

The soul-reaping Scooby Gang is back to help the spirits of humanity return to the Universal Pool and challenge the Eternal status quo.

For whom will the bell toll? Inquiring minds want to know. Jack Wallen is what happens when a Gen Xer mind-melds with present day snark. Jack is a seeker of truth and a writer of words with a quantum mechanical pencil and a disjointed beat of sound and soul. Although he resides in the unlikely city of Louisville, Kentucky, Jack likes to think of himself more as an interplanetary traveler, on the lookout for the Satellite of Love and a perpetual movie sign...or so he tells the reflection in the mirror (some times in 3rd person). Jack is the author of numerous tales of dark, twisty fiction including the I Zombie series, the Klockwerk Movement, the Fringe Killer series, Shero, The Nameless Saga, and much more.