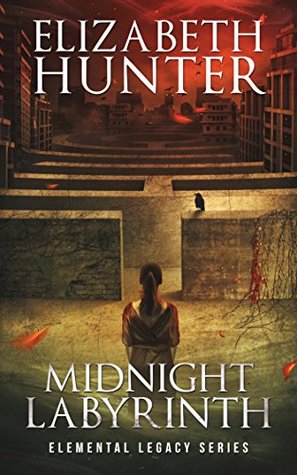 "He's one human caught in a tangled maze of theft, politics, magic, and blood.
In other words, it's just another night."

Benjamin Vecchio escaped a chaotic childhood and grew to adulthood under the protection and training of one of the Elemental world's most feared vampire assassins. He's traveled the world and battled immortal enemies.

But everyone has to go home sometime.

New York means new opportunities and allies for Ben and his vampire partner, Tenzin. It also means new politics and new threats. Their antiquities business is taking off, and their client list is growing. When Ben is challenged to find a painting lost since the second world war, he jumps at the chance. This job will keep him closer to home, but it might just land him in hot water with the insular clan of earth vampires who run Manhattan.

Tenzin knew the painting would be trouble before she laid eyes on it, but she can't deny the challenge intrigues her. Human laws mean little to a vampire with a few millennia behind her, and Tenzin misses the rush of taking what isn't hers.

But nothing is more dangerous than a human with half the story, and Ben and Tenzin might end up risking their reputations and their lives before they escape the Midnight Labyrinth.

MIDNIGHT LABYRINTH is the first book in an all new contemporary fantasy series by Elizabeth Hunter, author of the Elemental Mysteries and the Irin Chronicles.

I love Elizabeth Hunter. She’s one of the only independent authors who consistently produces quality work. Hell, her stuff is better than a lot of the traditionally published urban fantasy these days.

B/c I’m ridiculous, I dragged my heels about reading ELEMENTAL LEGACY, the second spin-off from her ELEMENTAL MYSTERIES series. *shrugs awkwardly*

Tenzin and Ben . . . I guess it kind of freaked me out. She’s a several millennias-old vampire, and last I checked, Ben was a teenager . . .

Except he’s not. In MIDNIGHT LABYRINTH, he’s twenty-five and hot enough to rival not-really-his-uncle Giovanni. And they’re not together like that anyway.

They will be. It’s inevitable. And having since caught up on the previous three novellas leading up to this one, the first full-length novel, I can tell you that:

1. If you has similar misgivings about ELEMENTAL LEGACY, you should can dive right into MIDNIGHT LABYRINTH without having read the preceding stories, and . . .

2. FOOLISH MORTAL, do not doubt Hunter.

I’m not only cool with Benzin, I now eagerly anticipate it.

I also eagerly anticipate Ben becoming a vampire, which is also inevitable.

Previously, his stubbornness regarding the subject was a point of contention for me—if you can be a Supe, why would you not be a Supe?—but in IMITATION AND ALCHEMY (ELEMENTAL LEGACY #2), Hunter has Ben begin to confront his fears about immortality in a way that not only emphasizes his youth, but also makes his reluctance sympathetic.

As for MIDNIGHT LEGACY, Tenzin and Ben are living in New York, doing their art version of Giovanni and Beatrice’s book retrieval business, which is awesome. I’m with Ben on this one. I love books. LOVE. But ever since watching White Collar, I’ve been fascinated by insurance fraud investigators.

In real life, I doubt it’s the legitimate version of grifting that Hollywood makes it appear to be, but urban fantasy isn’t exactly real life, is it? And the service that Tenzin and Ben provide for the immortal community is decidedly Leverage-esque.

What happens when the con artists get conned?

Shenanigans, that’s what. And who doesn’t love shenanigans?

MIDNIGHT LEGACY is the latest installment in Elizabeth Hunter’s ELEMENTAL WORLD. If you’re like me, urban fantasy is your jam, and finding new (to you) UF that lives up to the series that made you love it is often an exercise is futility. It doesn’t have to be. If you’re a Hunter noob, the first book set in this world is like a dollar:

If you’re not a noob, but you haven’t caught up with what may be my favorite Hunter pairing to date, tomorrow never comes. One-click it, one-click it NOW.

Here’s to growing up and doing it well. Highly recommended.