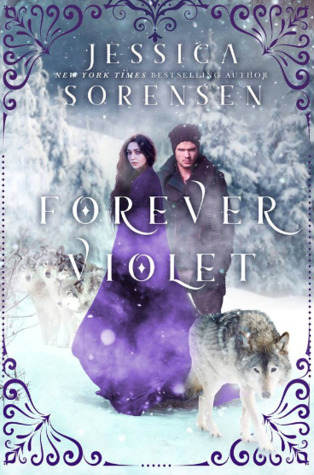 A year ago, I was attacked by werewolves. I’ve hated their kind ever since.

Now, I’m being told I’m one of them. That Jules, a tortured, gothic werewolf prince, is my soul mate and that I may one day rule over a werewolf pack.

Not how I saw my life going, but fighting my destiny isn’t an option. Neither is ignoring the powerful connection I feel to Jules.
But facing my future is going to be dangerous when not all of my pack wants me around.

Jessica Sorensen is a very prolific author. Prior to this book, I had read one other by her and I think I have some others by her in my massive tbr pile. When I saw this one though, rather than wait to read it like I usually do, I read it immediately.

This book pulled me in pretty much immediately. Lake and Legend are best friends although there is a problem. Legend is an old (but young looking)vampire and he has been banished to the Common Realm for a year due to a tryst with the one of the powers that be’s mistresses. His year is up so the two go out to a bar. Legend is celebrating going back, but Lake is grieving the impending loss of her only friend. While out, they see a girl that’s been attacked by werewolves near the bar and find out the werewolves were really looking for Lake to attack. After this, Legend finds a way to bring Lake back to the Midnight Realm where he lives, for a twenty four hour period. But he suspects something about Lake that she has no idea about. She has no memory before the age of eight when she was found in the Common Realm outside the Midnight Realm portal, alone and wandering. So Legend is betting on Lake never going back to the Common Realm-a place where Lake grew up in foster homes, had no friends, and worked as a waitress. It’s also a place where Lake had been brutally attacked by werewolves that called her by another name. Legend saved her back then and so their friendship began. The story really takes off once she goes to the Midnight Realm and meets the prince of the Violet Mountain werewolf pack, Jules. She has an immediate connection to him and he seems to know who she is. And what she is, turns out to be a missing werewolf princess. One whose powers have been dormant for a decade.

Lake is snarky, intelligent, beautiful, and forever trying to make waves. Jules has been broken since Lake left ten years before. He is extremely protective of Lake, and slowly lets her in on what her history is and what they are to each other. That is, when his sister Liberty isn’t telling her things behind his back. His father is the King and he’s extremely evil. Legend is a wonderful best friend to Lake throughout the book. He ended up being my favorite side character, although a werewolf named Shade, one of Jules’s guards, was a fun addition to the story.

While I enjoyed the author’s vision of the Midnight realm and all it’s different creatures, the different colored sky, sun, and stars, I have problems with the author’s scents she describes. Jules smells like moonlight and violets. What? And how does anyone know what moonlight smells like? Then there’s a drink that tastes like luminous sunshine. And a villain that smells like black roses. In this respect, this book really reads like a young adult book. But these characters are all adults. It’s mentioned many times, enough that it bothered me.

I am not going into the story any deeper, other than to say it’s a romance, but it’s also full of intrigue and a mystery. Betrayals, meeting other supernatural creatures, and what Lake and Jules are to each other is just part of this book. Why was Lake in the Common Realm, and why can’t she remember her past is also intertwined into the story. I enjoyed Lake’s snark and her relationship with Jules. I liked seeing her come into her powers and seeing how strong she becomes.

Although this is 18 plus for suggested readership, it reads more like a young adult book at times. But it’s 18 plus due to sexual scenes, language, and violence or references to violence. Recommended to paranormal romance readers.