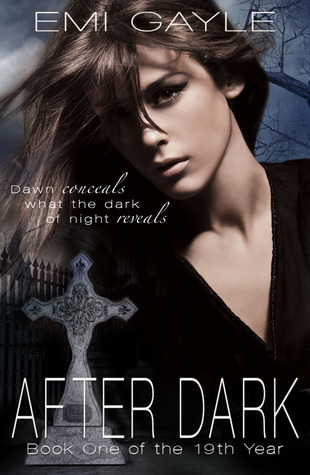 In exactly eight months, five days, three hours and thirteen minutes, Mac has to choose what she'll be for the rest of her life.

She has no choice but to pick. As a Changeling, it's her birthright. To Mac, it's a birthchore. Like going to school with humans, interacting with humans, and pretending to be human during the pesky daylight hours.

Once darkness descends, Mac can change into any supernatural form that exists—which makes her as happy as she can be. That is, until Winn Thomas, the biggest geek in her senior class figures out there's more to what hides in the dark than most are willing to acknowledge.

In this first of the 19th Year Trilogy, Winn might know more about Mac than even she does, and that knowledge could end their lives, unless Mac ensures the powers-that-be have no choice but to keep him around.


Teenage girl who just happen to be something other than human. It’s been written about so many times. But. Sometimes a book comes along that even though a tad similar to all the others, it’s actually so different and well written that the reader can forget all about any similarities.

MacKenzie(Mac)is a changeling and what that means, is that she can change into any supernatural creature that she wants to-after dark. Before dark, she is all human and has to attend school. She abhors humans and keep herself apart from everyone, pretty much guaranteeing that she has no friends. She is eighteen and has eight more months until she has to decide on her birthday what she will be forever. She has no idea what she wants to be and plans on waiting until the last minute to choose. The counsel that rules the supernaturals have started putting pressure on her to pick her forever form. Each member of the counsel started out as a changeling like Mac, and when Mac chooses, she will take someones place on the counsel and rule that race of supernatural. When she sees a boy from her school with a book that has a picture of something from her world on it, she knows she has to see the book. This involves making friends. The boy, Winn, is pretty much a nerd, but he is a good guy as well.

Mac’s character is the epitome of a hardcore kick ass loner. It takes finally letting some human’s into her life to begin to change Mac. I loved how vulnerable she was at times and how hard she tried to fight her attraction to Winn-all the while planning to use him to get to the book. I also really liked her conversations she has with herself in her mind. Winn was the epitome of a nerd, one that was cute with abs. But still a nerd. The more he is around Mac, the more he opened up to her and she to him and it’s not long before he realizes that Mac is “different.” Other important characters were Lucas, a vampire, and Alina, a fairy. They are Mac’s surrogate parents until she chooses. Also along for the ride are the other members of Winn’s nerd group, Maddie in particular. Maddie tries to befriend Mac. She’s the bubbly cheerleader type, but also happens to be smart enough to qualify for nerdom. But it’s the destroyer demon with a heart, Suze, the guard at the country club that doubles as a front for all things supernatural, that stole the prize for best side character for me. Throughout the book, he is a protector and information gatherer for Mac. He was sweet and funny and I want to see more of him in future books. Villains? They are there, but due to spoilers that’s all I can say.

This story pretty much centers on Mac’s journey to find out more about what a changeling is, who her real parents were, and her growing feelings for not only Winn, but also for other humans. Along the way, things start happening around her or to her and the reader along with Mac realizes that she’s no longer safe in her world.

At this point in the series it’s still a young adult read, but that could change as Mac is an adult now. So that’s just a heads up. Highly recommended to paranormal romance/urban fantasy readers age 15 up.

24 responses to “Review: After Dark by Emi Gayle (@Mollykatie112, @emijgale)”