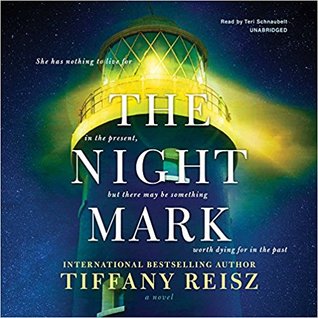 She has nothing to live for in the present but finds there's something worth dying for in the past....

From Tiffany Reisz, the international best-selling storyteller behind The Bourbon Thief and the Original Sinners series, comes an enthralling new novel about a woman swept away by the tides who awakens to find herself in 1921, reunited with the husband she's been mourning for four years. Fans of Kate Morton and Diana Gabaldon will fall in love with the mystery, romance, and beauty of an isolated South Carolina lighthouse where a power greater than love works its magi

I chose to listen to this after reading a wonderful review of the audio book by Kimberly at Caffeinatated Book Reviews. I am happy to say it was a good decision, although I am sure reading it would be okay as well. I first listened a few months ago during a hospital stay and then due to all that confusion, I didn’t get around to reviewing it. A couple of days ago, I decided to listen again and for the second time I was immersed so deeply into the story, that I literally listened all night.

Fay is an emotionally damaged woman after losing the love of her life after only one year of marriage. She married his best friend a month later because she was pregnant. Four years later(and a couple of miscarriages), the marriage is pretty much a train wreck and has been since day one. She divorces him about the time she gets a job offer to photograph scenes from an area in the low country of South Carolina. Almost immediately she becomes interested in an abandoned lighthouse, one that hasn’t operated in years. It’s hard to get to due to the riptides, but she manages. She is fascinated and when she later sees a painting of the lighthouse with a woman that kind of looks like her, she decides to investigate. But it’s when she sees a picture of the lighthouse keeper that she gets knocked for a loop. He’s the spitting image of her beloved husband, only a bit older. She is convinced that she is there for a reason. Does she end up going back in time? Yes, but the book has a lot more to it than just that.

I can honestly say that this time travel romance is completely different from pretty much any I have read and that would be a lot of them. There’s of course a romance, but additionally there is so much growth for Fay as a character. She starts out not really caring if she lives or dies and really she is leaning towards dying. It takes her going back to 1921 and living in a completely new to her world to want to live again. The fact that she meets the lighthouse keeper, Carrick, and starts living in the lighthouse cottage, only strengthens her resolve to live again. Carrick has no idea when or where she is from and there is a reason for that. He is damaged in his own way as well, due to his time in the navy during wartime.

So much romance, mystery, and magical happenings in this book kept me listening non-stop. The characters were so well depicted that I found myself wishing I knew them in real life. In addition to the main characters, the side characters of Pat, an elderly priest, and Dolly, the deaf, teenage housekeeper at the lighthouse, rounded out the read for me. So much so, that I would love to read Dolly’s adult story. The lighthouse, the island, and it’s scenery is so vividly described that it might as well be another character. The narration by Teri Schnaubelt was fantastic. I forgot that the male voices were being done by a woman, and that’s quite a feat! 5 star narration.

Tiffany Reisz is known for her bestselling books and erotica. This book is a departure from that and while I think it’s definitely for adult readers, the sex scene(s), while steamy, would not be what I consider hardcore erotica. Instead, I found this to be a well written, intricately plotted, and downright entertaining listen. Highly recommended!