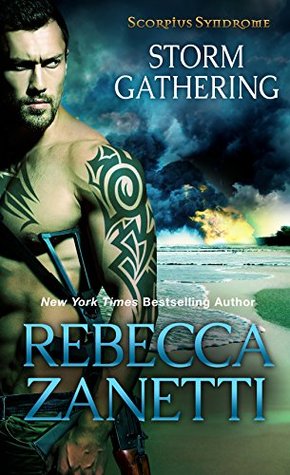 Even before surviving the Scorpius bacterium, Greyson Storm was a lone wolf navigating minefields. As a kid, he learned to take a hit and find safety. As an adult, he joined the military and quickly learned how to protect and defend. When the world ended, he created a mercenary camp with military precision, no entanglements, and a promise to avenge a fallen friend. As part of that vow, he kidnapped Maureen Shadow, but now that he has let her go, her blue eyes and intriguing mind keep haunting him…

As possibly the only Biotechnology Engineer still living, Maureen Shadow might be humanity’s one hope to survive the aftermath of Scorpius, making her frighteningly valuable to both allies and enemies. Even after sexual tension explodes with Greyson, she’s not sure which camp he belongs to—friend or foe? Worse yet, survival may mean thwarting his prime mission, putting her in even more peril. When danger and seduction collide, there is no safety in this new world.

I was very excited to back in the world of Scorpius Syndrome. I just love this world that Rebecca Zanetti has created. If you’re not familiar with this world, it is a post-apocalyptic world created by a bactrim that spreads rapidly. Many people died after contracting this disease, but not everyone dies. But, people are changed. How much they change varies. Some are just faster, both physically and mentally. Some have gotten extreme cases of OCD, only it isn’t exactly what we think of when we hear OCD. These people tend to focus on a person, and you can imagine how that goes. There are also the functioning sociopaths, like the president (the one in the book). Lastly, there are the ones that are more like rabid dogs, with little thought and just crazy.

So as you can imagine in a post-apocalyptic world, there are different groups. Mostly, this series has focused on Vanguard. They are a group with a soldier named Jax Mercury leading them. He just wants to see as many people survive as possible. Vanguard takes in anyone who is willing to live in peace. There are several soldier-like people, along with non-combatants with women and children. Vanguard is in central LA. There’s also the Mercenaries, lead by Greyson Storm. He doesn’t allow women or children in his group. Just a group of men who are mostly all trained to be soldiers. They aren’t bad people, but Grey doesn’t want the burden of non-combatants in his group. His group controls a section of Santa Barbara, along the beach. There is also a gang that was a gang prior to the disease called Twenty. Jax was a member before he was in the military. Lastly, there is the president, vice president and their Elite Force. Now you would think that they would be the good guys, but they aren’t. The president was infected and now he is a sociopath with an obsession for Lynne Harmony (heroine from book one, CDC scientist). The VP has not been infected, but he might be the biggest sociopaths in the book.

In the previous book the Mercs and Vanguard came together to take a bunker that was government owned. They wanted the research that was located there. So the two groups have a working relationship, but it is very tense. The leaders of both groups are very alpha male types. Also, there is the whole thing that Greyson Storm had kidnapped Maureen Shadow. She is the sister of the second in command of Vanguard. That isn’t something Raze is just going to overlook.

So we go back in time and learn how the kidnapping happens. We also see how Maureen is treated while she was a prisoner of the Mercs. Then we catch up to the present when she is back with her brother at Vanguard. She is a scientist that works with plants for farming. She was trying to find a way to feed the large population of this planet, that is before the population was culled by Scorpius Syndrome. Now she is trying to find a way to grow crops for the few people who are left. The greenhouse from the university are in Merc territory, so she has to go back to see if there’s anything left. Not to mention she wants to get her hands on some research in that bunker.

Grey has a choice that he as to make. The president gave him a really good offer to join forces. But Grey is also aware of exactly how crazy he and the vice president are. He is still technically in the military, so going against the president isn’t something that is easy for him. He also has a thing for Maureen and if he joins forces with the president, then he is against Vanguard. He can be an ally to both. So he has a choice to make.

This is a fun story. I love this post-apocalyptic world. It is so completely different from what we’ve seen. There are zombie like creatures and there are people infected, but that only makes them smarter and more dangerous. I love how Zanetti gives us a little more in each story. We learn more about the world and the disease. Each story builds on the previous one, so start with book one.

The biggest thing that I will call out about this story, and really all of Rebecca Zanetti’s stories, are the characters. I really love the characters that she creates. They are so real. Each character is unique. They each have their own struggle. They have their strengths and weaknesses. In this series, the women are extremely smart. There’s several scientists, doctors, a computer hacker (who can also kick some major ass). The characters are just so much fun. I’m excited for the next book in this series. I can’t wait to hear Damon’s story.

He grinned, showing a large gap in his front teeth. “Greyson ups the guards around the mansion and beach when he’s not around. You wouldn’t make it four yards before getting caught. And you don’t want to get grounded and not get to read again.” His faded blue eyes twinkled as he pushed the door open wide. “Come keep an old man company. We can play gin rummy.”
“You already owe me three million dollars,” Moe retorted, following the man through the house to the breakfast nook. “Is it just us in here?”
Atticus nodded. “Yeah. Damon went with Grey.”
“Where are they?” she asked, not that she cared. Yeah. She didn’t care at all. “Somethin’ going on up north,” Atticus said, shoving his stocky bulk around the table where rich people once dined. He wore a red shirt with purple pants and green socks.
“Are you color blind?” Moe asked, noting his clothes.
He nodded. “Think so. Why?”
“No reason.” Moe reached for the cards already on the table as Atticus poured two generous glasses of Pappy Van Winkle’s Family Reserve, a twenty-year-old Kentucky bourbon whiskey. “Whoa. Where did you get the good stuff?”

“So, if you want her to stay, why not make a move?” Damon asked, slowing down for what looked like a pile of bear furs.
Greyson tried to focus, but only one of his eyes was working. His body felt all right, though. “I can’t make a move. I kidnapped her, so she has no choice in anything. We’re not on equal footing, and she can’t make a fair decision.” Though man, he had to stop having wet dreams about her. She was all he thought about some days, and that had to end. Right now. “You know?”
Damon took the bottle. “I guess. Just never figured you for an equal partner type.”
Greyson turned toward his best friend. Hell. His only friend. “What do you mean?”
“Thought you’d be more of an I Tarzan, You Jane, type,” Damon said slowly. “No offense.”
Huh. Grey took the bottle and downed enough bourbon that the pain in his head finally subsided. “Only one person can be in charge in any situation. That includes personally,” he muttered.
Damon glanced his way. “Yeah, That’s what I thought” He frowned.
Greyson sighed. “You’re right. I mean, about me. But that’s after a decision is made. Maureen can’t decided to be with me because she doesn’t have the freedom to do that. Fuck, all of this talking was making his headache come back. “Enough Dr. Phil bullshit.”
“All right,” Damon said. “Let’s drink.”