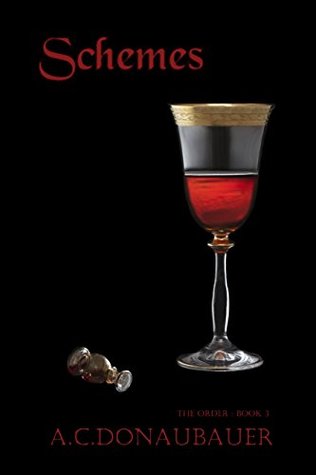 After the delegation's return not only the Old Kingdom has to face changes as a consequence of the contact with the Western Territories. Eryn and Enric, too, realise that their recently established bond is not without side effects. Eryn centres all her hopes on the healer from Takhan who is supposed to aid her for a few months and who is bound to arrive soon...

This is a series that I’ve really enjoyed since I read the first book. I can’t thank Dolly at Just Talking Books enough for putting this series on my radar. From the very beginning I’ve enjoyed the time that I’ve spent with Eryn, Enric, Orrin and Vern. As the series has moved forward, the cast of characters has grown and now there are even more characters for me to love.

After spending the previous book, Commitments, in Eryn’s original homeland, in Schemes, we are back in Anyueel, aka The Old Kingdom. Eryn is eager to move forward on her healing, but The Order has other plans for her. Eryn continues to struggle with The Order. The Order the official group of magicians which are basically like an army. They are the warriors of the kingdom. Eryn, being the only female magician because of a curse that was left on Anyueel to only sire male magicians, doesn’t understand the need for so much training in fighting during peacetime. She wants to focus all of her time on something she deems a greater need, healing (I tend to agree with her).

Enric is starting to show himself in more of a social setting than he has in the past. Being the second strongest magician in the land has given him a very lofty position. People were very scared of him. As Eryn works more with the general population and less with the elites, she is bringing Enric along for that ride.

Also in this book, Eryn is anxiously awaiting a healer from her homeland to help educate The Old Kingdom more in the ways of healing. Eryn has not formal training, but was taught by her father who did, though they didn’t practice openly with magic. She is quite surprised when she learns who that healer will be, but none other than her cousin which she doesn’t get along with at all. Along on that visit is Eryn’s mother, who she is really not happy about seeing.

Again Eryn, is faced with having to play political games, not only with her mother, but also her cousin and even the king himself. One of the parts I liked a lot is when Eryn actually has to go to her cousin for help in solving a problem. Eryn has taken over the orphanage, but doesn’t have time to run it herself, so she starts to look for someone to run it. She is very surprised when the companion of head guy at The Order, the most powerful magician in the realm, asks for the honor. See, in the Old Kingdom, companions (that is the term used for spouses) of powerful magicians don’t see it as fit to lower themselves to having a job. So when the highest ranking companion decides to take on this role, many of the others frown down on her. Eryn wants to help, but if she just comes right out and tells these people what she thinks, it looks back on The Order and on Enric. So she pays her cousin to do it for her. Since her cousin isn’t from this kingdom, isn’t part of The Order and their cultures are different, she can get away with things that Eryn can’t. This also seems to help to bring them together, along with a trick from the leader of The Order and some help from Enric.

I can’t go into everything because this book is very long (Amazon’s English version says 319 pages, but I know it is a lot longer than that. The German version says 805, which seems about right). I’m always hesitant to start because it seems like such a large task, but once I start reading, I can’t put it down. The story doesn’t feel long when I read it at all. I get immersed into the story and the characters lives and just get lost. If you like fantasy worlds with magicians and some humor, then I highly recommend this series. I really hope that the books’ lengths don’t deter you from trying them. I’m really excited for the next book where Eryn is one again traveling to her homeland. I just can’t wait to see what is in store for her there.

“What?”
“I thank my lucky stars for allowing me to witness that scene! It is balm for my soul! Just what I needed after dealing with Malriel today.” She laughed and went to the drinks cabinet to pour herself a glass of sweet wine.
“I am glad I could assist in cheering you up,” he remarked dryly.
“You did, there is no denying it,” she smiled. “I have discovered a side to you that I wouldn’t dream was buried there under all your dignity, superiority, strictness, eagerness to adhere to rules and all that. You were cheeky, snotty, uppity, ironic, disrespectful…”
“So basically, like you?”
“Exactly!” she beamed, not feeling the least bit insulted. “I am not the only one here being cursed with a parent who rather resembles some frightening monster in a story for children instead of a real person. But I want to say that you are still the one who is the better off of us,” she said.


“How are you going to spend your last day here tomorrow?” Junar enquired.
“Firstly, I am going to sleep in after all this tonight,” Eryn sighed. “Then I will probably take a walk through the city one last time and drop by at the clinic. In the evening the King wants to see us to say his goodbyes. And the three of you?”
“Go through our packing lists one final time, have last minute hysterics… the usual,” Junar shrugged.
“You plan your hysterics? That’s what I call organised,” Enric commented.
“Oh, it is,” Eryn nodded, “mine are too spontaneous for your taste.”
“Not true,” Enric contradicted, “I do appreciate the element of surprise. It’s never dull with you.”
“A declaration of love that makes me want to weep from the emotion,” she chortled.