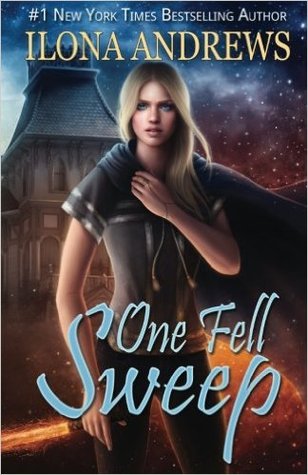 Gertrude Hunt, the nicest Bed and Breakfast in Red Deer, Texas, is glad to have you. We cater to particular kind of guests, the ones most people don’t know about. The older lady sipping her Mello Yello is called Caldenia, although she prefers Your Grace. She has a sizable bounty on her head, so if you hear kinetic or laser fire, try not to stand close to the target. Our chef is a Quillonian. The claws are a little unsettling, but he is a consummate professional and truly is the best chef in the Galaxy. If you see a dark shadow in the orchard late at night, don’t worry. Someone is patrolling the grounds. Do beware of our dog.

Your safety and comfort is our first priority. The inn and your host, Dina Demille, will defend you at all costs. We ask only that you mind other guests and conduct yourself in a polite manner.

I always enjoy going back and reading the full installment of the latest edition of INNKEEPER CHRONICLES when it’s made available. When you read a serialized novel, you can sometimes forget the key details you pick up along the way. And you can’t really appreciate the way things come together when you’re reading them piecemeal.

That’s one of the remarkable things about this series: it’s all made up on the fly. Sure, the Andrews might have a general idea of where they want to go, but actually getting there? That’s determined on a weekly basis.

This is the third volume from this world. Dina’s goal is still discovering what happened to her mysteriously vanished parents, but while we’ve been given a smattering of details about her brother, we meet another member of her immediate family, her sister Maud.

Me: I just told you. She’s Dina’s sister. #quityerbitchin

And Maud is a package deal. She comes with a daughter.

Helen bit a piece of bacon. Her eyes got big again and she scarfed it down and reached for the platter. Arland had reached for the bacon at the same time. They stared at each other across the table. A vampire standoff.
Helen wrinkled her face, showing him her tiny fangs.
Arland bared his scary fangs, his eyes laughing.
A low, tiny sound came from my niece. “


Awrawrrawrawr.”
“Helen!” Maud turned to her. “Don’t growl at the table.”
Arland leaned back, pretending to be scared. “So fierce.”
Helen laughed, her giggles bubbling up. “


Awrawrawr.”
Arland shuddered.
Helen giggled again, grabbed her mug, and hurled it at the wall. The mug shattered. I looked back. Helen’s seat was empty. The platter of bacon had vanished.

I have a friend who hates it when a character that was previously fighting for the heroine’s affections is suddenly confronted with someone new, someone who makes him forget all about his tired efforts on behalf of heroine-who’s-just-not-that-into-him. She thinks it feels cheap and perhaps disingenuous.

I don’t understand this perspective. Never have. Maybe I dated too much when I younger, but I’ve always had the idea that EVERYONE you meet is the wrong one until you meet the right one, percolating in my brain.

That doesn’t change the sincerity of your interest—in the beginning, you don’t know they’re the wrong one.

When this happens, as it often does in paranormal and/or contemporary romance, or in ONE FELL SWEEP which is neither, I prefer to see it in a positive light: Arland only thought he was interested in Dina b/c he’d yet to meet Maud.

The shifting of his affections is the neatest solution to the problem (and by “neatest” I mean “least bloody”). Dina and Shaun no longer have to deal with the hassle of Arland’s advances, and BONUS, the third wheel gets his own HEA (presumably . . . eventually. . .) rather than his funeral, b/c come on, people . . . The most common method of dealing with a spurned suiter?

Not really the Andrews style, is it?

Personally, I appreciate that.

Plot-wise, this may be the strongest installment yet, but I’m not saying anything b/c more fun to let you discover everything for yourself. #sorrynotsorry

6 responses to “Review: One Fell Sweep by Ilona Andrews”