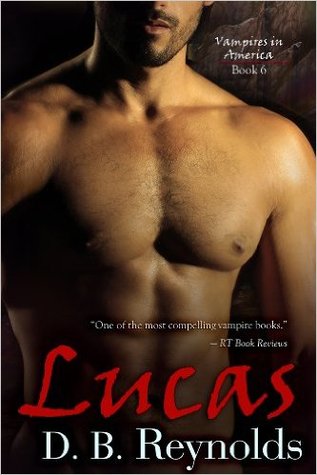 Lucas Donlon, Vampire Lord, is one of the most powerful vampires in North America and beyond. Charming and irreverent to his friends and lovers, he enjoys everything about his life as a vampire. But when a neighboring lord makes the mistake of declaring war, he quickly discovers that Lucas is every bit as lethal as he is charming.

Kathryn Hunter doesn’t care about powerful vampires or their wars. Her baby brother is missing, and she will do anything to find him, even if it means going against both her FBI bosses and the local vampire lord. But Lucas Donlon has other plans for the lovely FBI agent who’s landed on his doorstep.

Waging war against their enemies and each other, Lucas and Kathryn will risk everything to keep the most deadly vampire war in hundreds of years from engulfing every vampire and human in North America.


Four months ago, I listened to Lucas, the 6th of this author’s Vampires in America series, and loved it. I thought I had reviewed it, but it kind of fell by the wayside until now. None of this series should ever fall by the wayside, because they are just so entertaining and well written. Since I also have the eBook, I spent a couple of days re-reading it, and enjoyed it all over again. I am not going to pretend to remember the narration, although I did put on GoodReads that I loved the narration back when I first listened.

Lucas is the vampire lord of a fairly large section of North America that includes South Dakota, Minnesota, and I think Iowa as well. His neighboring vampire lord is Klemens, a very greedy vampire that wants more territory than is his, and Lucas’s territory will do just fine, or so he thinks. So it’s time for a vampire war it would seem. In the middle of this, FBI Agent Kathryn finds out that her beloved brother, Daniel, has disappeared while in South Dakota. So she takes a vacation from Quantico, and goes to South Dakota. Her only lead takes her to the local vampire lord, Lucas. And lust ensues.

Lucas is the most handsome man(vampire)that Kathryn has ever seen. She wants nothing to do with a vampire, but Lucas is having none of that. He is trying to help her find her brother, but he is in the midst of a war. He lives on a ranch, raises horses, and is well over two hundred years old. Kathryn is what Lucas calls, buttoned down and a control freak. She wears the stereotypical FBI clothes, keeps her hair pulled up or back, and tries to get away from Lucas at every turn-until she can’t. This is a romance after all. The only relative that is close to her is Daniel, who she practically raised after their mother died. She is determined to find him. On Daniel’s part, he’s a famous photographer, is charming, has recently started going to blood houses, and just happens to be gay. Blood houses are where the vampires go to meet willing humans.

I really enjoy this author’s world building. In this world, human’s know about vampires, but other than those that patronize the blood houses, little is really known about the vampire culture. They pretty much have their own rules and take care of any bad behavior on their own. Police are never called to intervene, but when the police do get involved, the charges just magically go away. It helps that vampires can scrub minds. Vampire lords are the law and can reach out with their minds if they want to and kill anyone that tries to betray them-as long as the vampire belongs to him. But what’s the fun in that? So Lucas and his warriors get involved in full out war at times.

All of these books feature a couple. Not necessarily a new couple because the couple from the first book, Raphael and Cyn, are showcased more than once, but even then, there usually is another couple meeting. And the author always gives us the new vampires backstory, usually from another time in history, and it always adds a lot to my reading experience.

Both the vampire war and the mystery of Kathryn’s missing brother, kept me reading/listening pretty much non-stop. The romance was full of major chemistry, banter, and at times a fight for dominance-but not in a kinky way. This is highly recommended to adult paranormal romance readers. Adult due to explicit sensual scenes and violence.