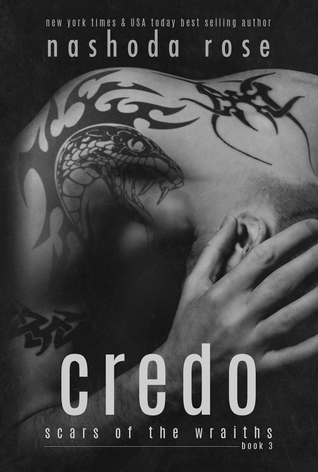 An unrequited love.
A tortured past.
An unbreakable bond.

Their love was well-known throughout the immortal world.
The powerful Taldeburu Waleron and his Delara.
But tragedy struck and tore them apart for years. One believing the other was dead.

When fate finally brings them back together again it isn’t kind.
It’s cruel and testing.
Sacrificial.

Because love has no remorse for its victims.
It doesn’t give you options.
And it won’t be stopped.

This is Waleron and Delara’s story.
It’s not pretty and it’s not kind.
But it's theirs.

Nashoda Rose’s Scar’s of the Wraths series is the setting for Credo, and a very worthy addition to the series. I realized that I had read these a bit out of order, but it was okay. All of these books fall under the urban fantasy umbrella, but are paranormal romance also as each book features another couple-sometimes more than one couple. Scars are a supernatural species that are immortal and are tattooed with an ink that lives on their skin and can be called upon to help in a crisis. Everyone’s ink is different and is on different parts of the body.

Delara and Waleron have loved each other since their first meeting in 1865. Both are immortal Scars and Waleron is her Taldeburu, a sort of leader of her part of the world of scars. As such, they should never be together, but then this wouldn’t be a paranormal romance if that stayed true. The story takes us back and forth through time to tell their early story and then to tell about the time that they are torn apart for years. In the now, the story ramps up when Delara has been beaten close to death-not a spoiler as you find this out pretty much upon opening the book. Waleron was held captive for over sixty years by a malicious and vicious supernatural female. Delara had thought him dead and had been mourning him for all of the sixty years. When he comes back, he won’t allow her to be with him because of the side effects of what has been done to him. He doesn’t tell her why though. So yes, there’s quite a bit of angst on both of their parts because they are each others soulmates and should never have been apart.

World building? This author has excelled in building a whole world with a supernatural creature that is completely new to paranormal books. She didn’t stop there, but instead also created a backstory to explain why Scars exist and how they came to be. She includes new words to describe their living situations, the center of the earth monsters they hunt-insects that take over newly dead bodies-and topping it all off with another realm where the wraiths that govern over the Scars, live. Waleron is tasked with doing the bidding of the wraths and is a sort of liaison between them and the Scar’s under his control. Lots more world building as well kept me turning pages as fast as I could. Fascinating.

Quite a few of the characters are the same from book to book so it keeps it interesting to keep up with favorites or to see others come to the forefront. I am really hoping for more books because I want to see at least two more characters get their story, each has been in most, if not all the books-Jedrick and Xamien in particular, although I would like to see more of Damien as well. All of this author’s characters are fully realized and well written.

Romance, action, violence, betrayals, and steamy scenes are just some of what you get with this book and series. I highly recommend this to adult paranormal romance readers that enjoy urban fantasy aspects to their reads.