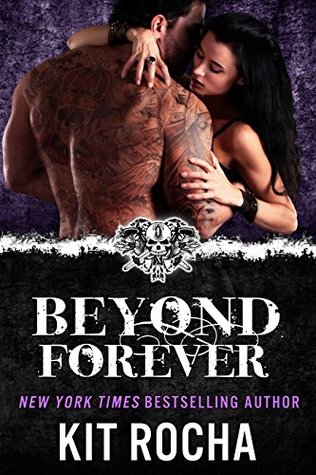 Before they were the King and Queen…

Six years before the Beyond series started, an ambitious bootlegger named Dallas O’Kane caught a very pretty thief named Lex with her hand in his safe.

The rest is very sexy history.

In Beyond Forever, follow Dallas and Lex through the turning points in their relationship, from the night he caught her trying to rob him, through his rise to successful bootlegger, to legend, to Sector Leader--with Lex always there, willing to give him the push he needs.

Beyond Forever is a prequel novella that jumps through time to tell the story of the biggest moments in the formation of the O’Kanes and their King and Queen. It will be far more enjoyable if you’ve already read Beyond Control, and contains spoilers for the entire Beyond series.

I’m always up for spending some time with the O’Kanes. They are the funnest gang that I’ve ever read about. Dallas O’Kane, their leader, is extremely loyal to his people. He takes his responsibility as their leader with extreme seriousness.

This novella takes place after the end of the series. Dallas is walking around and looking at the new Broken Circle Bar right before the Grand Reopening. He then flashes back to how he got to where he was at now, how he became the “Barbarian King of Sector Four”.

I loved seeing how much Lex worked Dallas to become the leader that he became. Not only was she basically his stylist, she was also his confidant and conscience. The rise to power wasn’t easy on Dallas. I really enjoyed going on this journey with him. It made him seem more human. He seemed so confident in the first book and throughout the series really. But you can see that he had more help that we realized.

I really enjoyed seeing him with Lex again before they paired up in Beyond Control. I love seeing Lex in her element and molding Dallas to be the businessman that he needed to be to protect his people.

I think this is real fun read for the people who are a fan of the series. If you haven’t read the Beyond series yet, this isn’t the place to start, even if it mostly takes place before book one, Beyond Shame (which is free at the time of this posting). There are spoilers for the series. This story also assumes you know the facts from at least Beyond Control (which is $0.99 at the time of this posting), which is Dallas and Lex’s book.

“What’s O’Kane’s deal, anyway?”
“What do you mean?”
Hell, she wasn’t sure herself. “You know, what’s he after? What’s his endgame? Booze, I get that, but there’s plenty of it already out there. What’s he gonna do different?”
Nessa grinned. “Everything.”

Maybe the bastard had been right after all. “It’s a nice idea, but I don’t know shit about selling sex. Liquor’s my wheelhouse, darling.”
“Bullshit.” She stretched over and wrapped her fingers around the neck of the bottle. “You put a pretty label on this bottle, didn’t you? That’s sex. Your men–the tattoos and the leather? Sex. Even your whole thing.” She waved her other hand. “Tough, untouchable leader, intense but somehow above it all? Sex.”
Yeah, he wasn’t feeling above it all with her lips wrapping around the word sex that many times in a row. He couldn’t quite tear his gaze from her mouth–and if he let himself open that door, he wouldn’t be able to stop imagining her wrapping her lips around his cock.
A hard-on was not conducive to business planning. “I don’t think most of my patrons wanna fuck me, Lex.”
“Maybe not.” Her voice dropped to a whisper. “But you can make them want to be you.”
When she put it like that, the ideas fell into place easier than breathing. He could close his eyes and see it–the refurbished bar, with a VIP section where he could hold court. Definitely more leather and chains for him, not just clothing, but a style. The dancers on the stage would have to be good, a fantasy the average guy off the street in Four could only dream of obtaining.
But that sorry bastard could get close to the dream–with O’Kane liquor.
“Damn,” he whispered. “You’re smart.”
“Try not to sound so shocked, honey.”

Find the entire Beyond series here

28 responses to “Review: Beyond Forever by Kit Rocha (@mlsimmons, @kitrocha)”