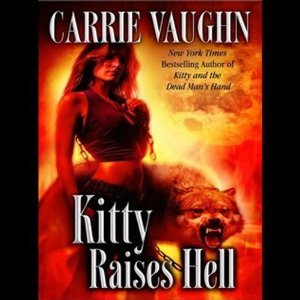 What happens in Vegas stays in Vegas...except when it doesn't. Kitty and Ben return to their werewolf pack in Denver only to discover an invisible evil that smells of brimstone and plays with fire has followed them home. Stalking the whole pack, it leaves a charred trail of ashes and death across the city.

Kitty seeks help from Rick, the master vampire of Denver, as well as from the paranormal investigators on a popular reality television show. But when a mysterious vampire who claims to be a demon hunter---and the only one who can help them---suddenly arrives, Kitty and her allies won't be able to predict what he really wants...or what they must do to extinguish the terror that can torch them all.

It took six tries, but I knew that Carrie Vaughn had it in her. Finally, a 5-star listen! KITTY RAISES HELL was the culmination of nearly half a series worth of world-building, character development, and story progression. It took Norville longer than most Urban Fantasy heroines to prove her value, but I’m glad that I stuck it out, and look forward to seeing where the author and Marguerite Gavin go from here.

As I’ve mentioned in some of my previous reviews, there have been very few constants in these books other than a couple of indispensable secondaries, and that trend continued in this installment. Queue a group of TV paranormal investigators, and T.J.’s little brother, Peter. However, in this particular instance these unknowns worked to Vaughn’s advantage, and I’m beginning to suspect that there may be a method to her madness.

The plot was an extension of KITTY AND THE DEAD MAN’S HAND to a certain extent, so I think that it goes without saying that these novels should be read in sequence. The Band of Tiamat did surprise me with their latest form of attack when their supposed “demon” turned out to be a completely unforeseen woo-woo type. Rick’s stance on Kitty’s predicament and his offer of help also caused me to gain some newfound respect for his character.

Given the large number of walk-ons in this series, I am increasingly impressed with Marguerite Gavin’s ability to differentiate each and everyone one of them by minutely adjusting her voice, timbre and inflection. Her real coup de grâce however is with the MC; Kitty’s radio stints seem to be on the decline, but they remain one of the best elements, as does the spectrum of emotions that Gavin injects into the protagonist’s sticky situations.

KITTY RAISES HELL was the audio that tipped the scales in Carrie Vaughn’s favour.