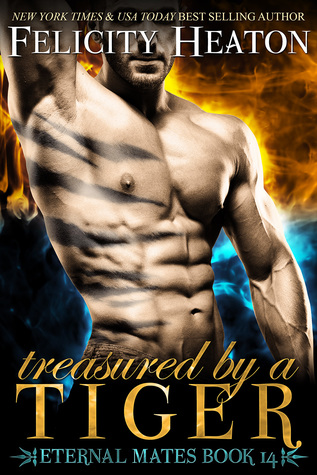 Despised by his tiger shifter pride as an abomination, Grey has ventured far from home, deep into the bowels of Hell in search of answers about the machinations of Archangel, the mortal hunter organisation who held his twin captive. With no knowledge of the realm, and little skill with the local languages, he quickly finds himself at a dead end—until he crosses paths with a beautiful hellcat female who rouses his darkest most dangerous instincts.

Lyra has been a fool, falling for the charms of a male whose only desire was to make a fast buck by selling her. Shackled and collared, her strength muted by magic, she awaits her time on the stage at a black-market auction, but before it can come, all hell breaks loose and she seizes a chance to escape—and runs straight into a majestic warrior who steals her breath away and tempts her like no other as he battles alone to free everyone.

When Lyra offers her services as a translator to repay Grey for saving her, will he be strong enough to resist the needs she awakens in him and spare himself the pain of her inevitable rejection when she discovers the truth about him? And when the powerful male in charge of the slave ring starts a bloody hunt for Lyra, can she escape another collar and find the courage to trust the tiger who is capturing her heart?

After three months of back-to-back cat shifter books, you’d think that I’d be sick of Felicity Heaton’s kitties, but au contraire! TREASURED BY A TIGER was a great way to wrap-up the sibling HEAs, although I’m not ruling out the possibility of a fourth with Byron. This story takes us back to Hell which just so happens to be my preferred setting in the ETERNAL MATES universe, and when you pair that with a feisty female lead and a humble hero, I couldn’t resist falling for this author’s seductive characters and writing all over again!

Lyra & Grey have a serendipitous meeting in the most unlikely of places: a slavers auction in the fiery pit. He’s unable to resist crashing the party to put an end to a distasteful practice, and she’s too injured to flee, so she must put her faith in a male even though it was one of ’em that’s to blame for her current predicament. Neither member of this duo experienced insta-love however, there was definitely insta-lust! It’s tough constantly finding new ways of introducing fated couples, and yet Heaton seemingly does it with ease.

I enjoyed this novel’s spin on the tiger protagonist; he’s a virgin with self-esteem problems due to being treated differently by his pride because of the colour of his fur. Add to that the heroine’s horrible history with male hellcats, and you’re left with a pretty big elephant in the room. Watching Lyra & Grey work on overcoming their hang-ups in order to embrace their destiny as Eternal Mates was quite remarkable, and they do it while facing off against everything that Hell throws at them.

Fuery’s tale is due out later this year if I’m not mistaken, and I’m amped for another mad elf installment, but Brink and to a lesser extent, Aryanna, make appearances towards the end, and now I’m really curious about their story. The black dragon seems to be closely tied to Archangel, and maybe even the reason why his species has been trapped in darkness for millennia. Sounds like we might be making major headway in this series’ main plot arc in the not so distant future. YAY!

TREASURED BY A TIGER concludes the feline trifecta however, the fun continues later on in 2017.

2 responses to “Review: Treasured by a Tiger by Felicity Heaton (@felicityheaton)”