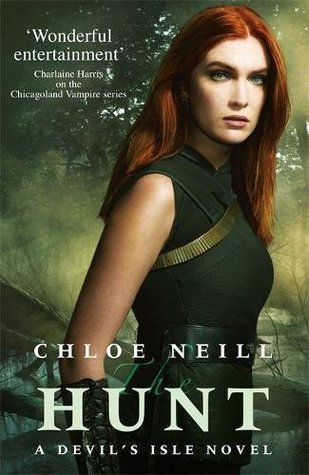 From the New York Times bestselling author of the Chicagoland Vampires Novels--the hunter becomes the hunted in a New Orleans devastated by a Paranormal war....

When bounty hunter Liam Quinn discovered that Claire Connolly was a Sensitive and infected with magic, he should have turned her in to be locked up in the prison district known as Devil's Isle. Instead, he helped her learn to control her power and introduced her to an underground group of Paranormals and humans who know the truth about the war and those who fought it.

Now the weight of Liam's own secrets has forced him into hiding. When a government agent is killed and Claire discovers that Liam is the prime suspect, she races to find him before the government can. But she'll discover proving his innocence is no simple matter. Their enemies are drawing closer, and time is running out....

THE HUNT was more balanced plot/character-wise, but the story did little to distinguish itself from other books in this genre. The focus was on who framed Liam for murder, and even though I did enjoy that aspect, the series arc and relationship between the two leads fell kinda flat. It was something that we’ve seen countless times before, and wasn’t much of a stretch from Chloe Neill’s usual stomping grounds. I liked it for what it was: frivolous entertainment.

There was quite a bit of angst in this novel, and for a couple that was just on the cusp of being an item in the last installment, I had some difficulty grasping why either of them was willing to put in the effort. There was a lot of “what’s he thinking / non-verbal communication / mind-reading / he-says-she-says” mumbo jumbo going on, and frankly that’s no way to start a romantic union, if there are this many problems in the honeymoon stage it doesn’t bode well for their long-term prospects.

Unearthing who killed Broussard was the most compelling element however, even it was rather meh. I mean, the protagonists go to the scene of the crime, discover a clue that leads them directly to the culprit who still has the victim’s blood on their hands. Ok, yes, I’m dumbing it down a tad, but that doesn’t change the fact that a child playing detective could have solved this case in an afternoon. The events in this volume did NOT keep me guessing until the very end.

My favourite part was the brotherly banter between Gavin & Liam. They bicker the way family should, and their dialogue brought some lightness to an otherwise uninspired tale. Considering the objective of this title’s antagonist, I felt as though it could have used more of a build-up. The progression from identifying the offender, to uncovering their plan, to the hook for book 4 was too abrupt. You don’t go from small cheese to supervillain overnight.

After three blah installments, I’m declaring THE HUNT as the time of death for the DEVIL’S ISLE series.

3 responses to “Review: The Hunt by Chloe Neill”