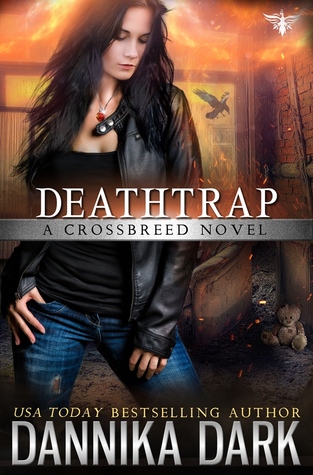 For Raven Black, hunting criminals is second nature. So is denial. It's not easy moving forward with one foot stuck in the past. But a new case offers her a much-needed distraction when Keystone accepts their toughest assignment yet - to track down an elusive criminal who's selling children on the black market.

Their investigation leads them deep into the underbelly of the Breed world, a place both treacherous and enticing. With no room for mistakes, Raven makes a tough decision to lock the door to her past before it interferes with her job. The only trouble? Christian holds the key.

The stakes are high, and a shocking twist turns everything on its head. Will they catch this criminal before more lives are lost? Find out in the latest edge-of-your-seat installment of the Crossbreed series.

I tried, I really did. I wanted to make this book last even though I received it just a few days before this review was to post. But it came to the point that I couldn’t stop reading, even if I had tried. So I found myself at 6 am this morning finishing the book and now I can hardly wait for the next one. Why? Because this author can write like nobody’s business and tell a story guaranteed to keep you reading like I did until the wee hours of the morning.

Dark’s characters are all fully realized to the point that you feel you know them by the end of all of her series. With each book, she peels back the many layers of the characters to add more information, until each character feels like an old friend. In this third installment of the Crossbreed series, Raven has settled into her new life with the members of Keystone, the highly secret organization that takes care of Breed problems that the Breed higher ups call on them to take care of. The members live together in a castle type house on the outskirts of Cognito, otherwise known as the place to be if you are Breed. Breed members are all supernatural and humans know little to zero about them. And it’s part of Keystone’s job to keep it that way, case by case. Christian, formerly of Dark’s Mageri series, is Raven’s partner. While Raven is a crossbreed,(something very rare)and is half vampire and half mage, Christian is all vampire. While Raven hates the vampire part of herself, Christian wants her to embrace it. We learn a lot more about Raven’s life before Keystone and it was interesting, to say the least. All of the rest of the characters from Keystone are back and we do learn more about most of them. In particular, we learn Shepherd’s past and what’s still going on in his present. It’s not pretty. He’s the Sensor of the group and is scarred, both in his mind and body.

Each of the books in this series feature a paranormal mystery. This time around, someone in the Breed world is stealing breed babies and auctioning them off to the highest bidder. We are along for the ride as the members of the team start investigating after finding a young mother dead and the baby gone. The case takes them into the bowels of the Breed world, and places that Raven, even though she had been homeless up until recently, hadn’t even realized existed. Pretty fascinating stuff.

Romance? Raven is starting to admit to herself that she has feelings for Christian. And in this installment, we finally see how vulnerable Christian can actually be-something I never thought we would see. But I am all for it. However, members of Keystone are not allowed relationships with each other. I will say that if you like a really slow burn romance, this is a series for you!

Paranormal mystery, slow burn romance, wonderfully realized characters, humor, and plenty of action and violence, made for a sometimes fun, but also a dark and twisted tale. The snarky banter between Raven and Christian was close to being the best part of the book for me, second only to the romantic moments. The hunt for the kidnapper/murderer will keep you turning pages and the twist, I sure didn’t see coming.