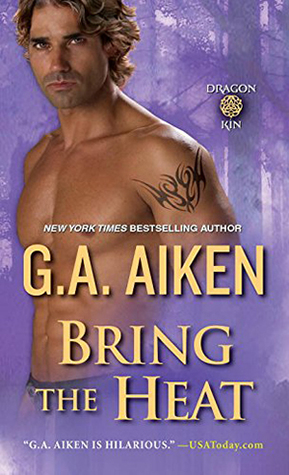 HE SAYS . . .
I, Aidan the Divine, am . . . well, divine. My name was given to me by the Dragon Queen herself! I’m a delight! Cheerful. Charming. And a mighty warrior who is extremely handsome, with a very large and well-hidden hoard of gold. I am also royal-born, despite the fact that most in my family are horrendous beings who don’t deserve to live. And yet, Branwen the Awful—a low-born, no less—either tells me to shut up or, worse, ignores me completely.

SHE SAYS . . .
I’ll admit, I ignore Aidan the Divine because it annoys him. A lot. But we have so much to do right now, I can’t worry about why he keeps staring at me, or why he always sits so close, or why he keeps looking at me like he’s thinking about kissing me. We have our nations to save and no time for such bloody foolishness . . . no matter how good Aidan looks or how long his spiked tail is. Because if we’re going to win this war before it destroys everything we love, we’ll have to face our enemies together, side by side and without distractions. But if we make it out alive, who knows what the future will hold . . .

I’ve have been a huge fan of the Dragon Kin series for a while now. When I started it, I had no idea that G.A. Aiken was also Shelly Laurenston, who is also a favorite of mine.

Branwen the Awful of the Cadwaladr Clan, Captain of the First and Fifteenth Companies of the Dragon Queen’s Armies, Colonel of the Ninety-Eighth Regiment of the Southland Armies, daughter of Ghleanna the Decimator and Bram the Merciful (yes, they love their titles in this series). I’ve been a huge fan of Brannie since I first met her in What a Dragon Should Know. She is a Cadwaladr and I just love them. They are a bit crazy, extremely loyal to their family and just an all around good time.

Aidan the Divine is one of the Queen’s Mì-runachs. He is also a royal and very rich, but he doesn’t let that get to him at all. He serves with Eibhear, Caswyn and Uther. Aidan spends a lot of his time as the one to try to keep them out of trouble (which Caswyn seemed to be in a lot in this book with Brannie). I like Aidan, but he isn’t a character that I was intensely familiar with before this book. This series has A LOT of characters, so some just don’t stick out as much as others (especially when they haven’t had a book of their own).

So, a lot happens in this book and not just with Brannie and Aidan. We get time with Annwyl the Bloody and both of her kids, Talan and Talwyn. Keita has an extremely large part in this book too, which I loved. She is a ton of fun and is always trying to poison everyone. She is the Protector of the Throne, which means she is a spy and an assassin. She also very good at hiding what she is under the guise of a dumb, flouncy girl. I also loved that we got to spend time with Ren, an Eastland dragon prince.

So, if you’re not familiar with this series, don’t start with this book. You will be completely lost with the sheer number of characters and the plot that has been going on for several books now. There are a group of Zealots that want to see Annwyl the Bloody’s children dead. They don’t like that they are half dragon and half human (they shouldn’t have been able to conceive in the first place, but since there have been several births in this series of mix species). There is a war between these Zealots and the dragons along with the human armies that fight with them.

It is hard to say too much or there will be spoilers. Just know that this is a really fun series that you need to start with book one. The dragons are hilarious. There are bloody battles, drunkenness, quest-like travels. There are a lot of characters, but I love all of them. They are very unique and all have something that they bring to the table. You will also be laughing out loud frequently (no matter how much you try to keep it in).

This is one of those books that I could fill the review with nothing but fun sections. So many to choose from.

Brannie nodded at her mother’s words. “Good.” She glanced at Aidan and said, “We need to get back and—”
“No,” Ghleanna cut in. She jerked her thumb at a surprisingly quiet Keita. “You go with your cousin.”
Brannie reared back as if she’d been slapped.
“I’ll do no such thing.”
Black eyes locked on black eyes. “You’ll do as I order you to.”
“No. Not on this. I will not risk my troops—Mum! Ow! Stop it!”
Aidan cringed watching Ghleanna the Decimator grab her daughter by the hair and walk off with her.
“Excuse us a minute,” she growled at Rhiannon.
“Take your time.”
Once the two She-dragons were a bit away from them for privacy, Rhiannon smirked at Aidan and asked, “Do you plan to disobey any orders, dearest Aidan?”
“Who? Me?” He snorted. “I like my hair just where it is, my queen. On my head.”
“It does look lovely there.” He smiled.
“Doesn’t it?”


With a nod, she left and Aidan looked at Brannie. “Why didn’t you say anything?”
“I was trying not to glare. That requires concentration.”
“You had to concentrate on not glaring?”
“Because I didn’t know I was glaring! So I kept thinking, ‘Am I glaring now? What about now? I feel like I’m glaring now.’ It was endless.”
Aidan shook his head. “Do you realize that you make things—outside of battle, I mean—very complicated?”
“No, I don’t.” “You do. Constantly. If a sword is in your hand and someone is screaming bloody murder as they charge you . . . you are direct and ready. But you and Izzy trying to figure out what to eat for dinner . . . I think we’re still waiting for you to make up your mind.”
“Oh, it’s not that bad.”
“If that’s what you need to believe,” Aidan said.

Aidan sat on the mattress and waited for Brannie to stop laughing, which she did eventually. But then she became fascinated with the actual bed.
“What are you doing?” he finally asked when he got tired of watching her crawl around the bed and press her hands into it.
“Wondering why it’s so bouncy. None of our beds at home are bouncy. You’d think Annwyl would have bouncy beds.”
“Seriously?”
She stopped, gazed at him. “What?”
“We’re both here, naked, on our last night of what may be freedom or possibly our lives . . . and you’re worried about a bouncy bed?”
Brannie nodded. “Yes.”
Aidan grabbed Brannie’s arm and pulled her close.
“Kiss me, Brannie.”
“All right, but if we make it back home alive . . . I want you to get me a bouncy bed.”

24 responses to “Review: Bring the Heat by G.A. Aiken (@mlsimmons)”