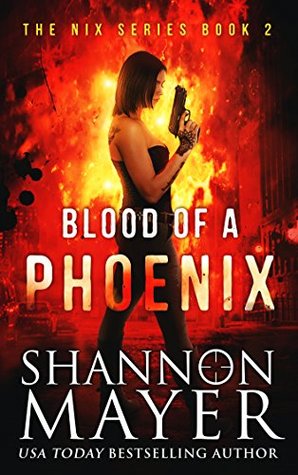 I thought that going after those who'd destroyed my life would help me move on. At the very least, that it would ease the thirst for vengeance singing in my blood. I was wrong.

With my guns at my side, I continue to search for ways to punish the one man who took everything from me. The man who killed my family. Death is far too good for him.

I want to make him suffer, to take from him everything he loves.

To that end, I need a code breaker, one who deals in magical glyphs. But in the hunt for her, I discover there are far more secrets to my life, and my blood, than I ever could have imagined.

Secrets that are burning their way out of the past and the shadows.

A promise dangled in front of me by the enemy of my enemy is too sweet to ignore. And I will cast all my cards on the table for the one chance that the promise he offers is true.

That my son is alive.

God help those who stand between my boy and me.

Shannon Mayer brings her A-game in BLOOD OF A PHOENIX by spinning an exciting story full of unexpected twists, and dropping enough bread crumbs about this trilogy’s finale to leave readers clamouring for an encore. The only negative thing that I have to say about this installment is that at times it seemed like Phoenix just knew or got a feeling about what she should do in a particular situation, but her intuitiveness was eventually explained, so I can’t even count this as a legitimate critique. This book was glorious!

In this title we revisit her son, Bear’s, death, which was one of the harder pills to swallow in FURY OF A PHOENIX due to the visceral emotions that it evoked in me as a new mom, and I was grateful for the opportunity. Mayer didn’t overdo it where Eleanor, Dinah & Linx were concerned either, and that was another worry of mine that was laid to rest. As a reviewer, I occasionally feel like an author took my opinions to heart, and this is one of those instances. Probably not the case, however I do like seeing improvement in the writing.

Simon & Noah’s motives continue to be murky at best, and I found myself oddly attracted to Killian, the Irish gangster. He’s kind of a male version of the heroine, but with a few obvious differences. I wouldn’t mind it if he and Nix ended up together, although not a lot time has elapsed since her husband’s death in the first novel, so at this point a relationship might be a little bit premature. I’d settle for a quick romp to feed my need for romance, and to provide a brief respite from all the violence and death.

It’s killing me not to be able to say more about Phoenix’s guns, Romano’s deal with the devil, and the revelation about the protagonist’s bloodline, so I’ll finish by talking about how much I love the dog instead. Abe is a big Malinois trained as a farm dog and protector, is one of the finest secondary characters that this series has to offer, and he never even says a word! His body language whenever a command is given speaks volumes, and the way in which he fiercely protects his human tugged at my heartstrings in the best kind of way.

BLOOD OF A PHOENIX hit all the right notes that a sequel should.

3 responses to “Review: Blood of a Phoenix by Shannon Mayer (@TheShannonMayer, @HiJinksInk)”