Several years ago there was public outcry against Karen Marie Moning when she rehired a registered sex offender to narrate the role of Barrons in the audiobook version of the (then) latest installment of her Fever series.

I too was disgusted, but I didn’t understand the shock a lot of her long-term fans were demonstrating . . . How is it surprising that someone who would subject her adolescent heroine to the sexual advances of centuries-old men (for lack of a better term) would also employ a man who behaves similarly in real life? #notsurprised

I’m referring to the events of Iced, of course, the first installment of the Dani spinoff, and while the specifics are unknown to me—when I heard the rumblings, I refused to read it—the consensus was clear: the interactions were inappropriate.

Oh, some readers were more bothered than others, but even the readers who weren’t offended used the speculative nature of the series as grounds for leniency.

BUT. As far as I’m concerned: NOT fine.

You: Y you beat this dead horse?

Me: B/c that horse is apparently not dead.

I was feeling graphic novel-y a week or so ago, so I logged into my NetGalley account and checked out the Read Now options (b/c unless they’re DC or Marvel, pretty much all the graphic novels are Read Now).

At first glance, The Scarecrow Princess by Federico Rossi Edrig appeared to be one of the most promising. It was recommended for fans of Coraline and Over the Garden Wall, and I’ve always been drawn to myths about crows, so I downloaded it immediately.

It did not go well. 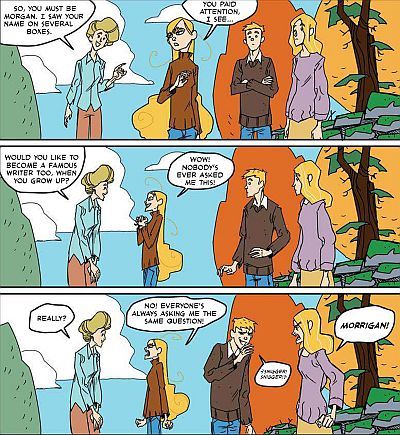 You: What a brat!

But she’s only fourteen, and we all had our moments at that age, didn’t we? Still, just b/c I can identify the developmental stage doesn’t mean I want a heroine who embodies it.

You: How can you be sure she’s fourteen?

Me: B/c she’s clearly identified as such.

SO. No room for misinterpretation. Which made it all the more upsetting when this happened about halfway through: 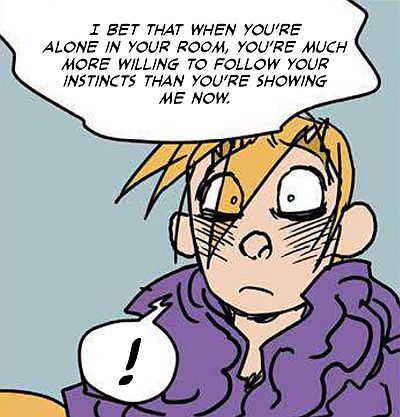 That these kinds of comments are made to an underage child by an adult are upsetting enough, but what really chaps my hide is that THE AUTHOR KNOWS EXACTLY HOW INAPPROPRIATE HE’S BEING.

Look at her reactions. These aren’t off-hand comments written by some socially awkward middle-aged man who doesn’t understand the implications of his villain’s overture, HE KNOWS.

One can only hope that the knowledge has been extrapolated, but as I’ve already pointed out, art. Imitates. Life.

And hey, now that we’ve got the sexual harassment of a minor on the table, what’s a little underage drinking?

I repeat: this graphic novel was recommended for fans of Neil Gaiman’s CORALINE, a children’s book, the recommended age level being 10+.

That’s not even the worst of it.

In the final conflict, fourteen-year-old Morrigan is stripped of all of her clothing (i.e. completely nude), in the presence of Bad Guy-the-Pervert, who is ALSO NAKED.

And no, I’m not posting the screenshots of that (though I do have them), b/c it feels like it’s a hop, skip, and jump away from child pornography, which is a FELONY.

When I finished reading THE SCARECROW PRINCESS, I went back to NetGalley to skim the reviews already posted, but I was baffled to discover that not one of the other nineteen listed reviewers raised any concerns.

I take that back, there was one mention: a LIBRARIAN said that she felt the nudity was gratuitous, but she still gave it four stars, b/c the color palette was evocative of autumn which “feels appropriate at the moment.”

How is this acceptable? How?

What about you? Do these things turn you into a RAGE beast as well? What are your RAGE buttons?