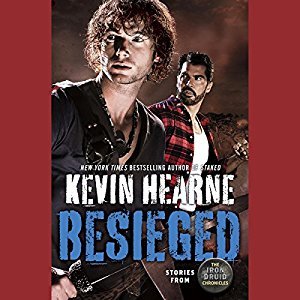 This is a campfire tale narrated by Attitus to Granuaile and Oberon, but it predates the IRON DRUID CHRONICLES, so Luke Daniels adopted an old Irish accent for the dialogue which was almost as fun to listen to as Owen’s. Readers discover in part how the protagonist became the Iron Druid which is a tidbit that’s mostly glossed over in the full-length books, thus I really enjoyed unraveling that mystery, plus the usual Siodhachan takes on an impossible task for a God in exchange for a future favour plot line.


GODDESS AT THE CROSSROADS ~ 3.5 Stars

This one was a barrel of laughs! The hero and William Shakespeare go witch hunting, and find more than they bargained for. O’Sullivan is pretending to be a French nobleman, so that he can “misunderstand” questions that he doesn’t want to answer, and the Bard is drunk for most of this short which makes them quite the pair. Turns out that we can credit our favourite Druid for a key piece of poetry in MacBeth! GODDESS AT THE CROSSROADS had nothing to do with the main story arc however, it was entertaining.

I liked this segment the least, probably because it revolved around Granuaile. It was a play on Heaven & Hell, but carnival-style. The Irish Wolfhound stole the show at certain points, and the narrative was a bit darker than what we’re used to with a pretty high body count. Although, it did serve as a lesson for the female lead that being a Druid isn’t all roses and fairy dust, it’s ghouls and reapers too.

Attitus shares another tale from his past however, Oberon chimes-in throughout the account with star ratings which were freaking hilarious. His fearless leader doesn’t even get to finish his first sentence before the pooch gives him 1-star because “many books suffer the same fate”—a shot at SCOURGED’s Goodreads page? Luke Daniels had to pull-out his Italian and English accents for this Wild West short, and Kevin Hearne kept me happy with little gems such as the looming french fry-magedon. Haha!

Owen regales Greta with the story about how he met Siodhachan, and became his mentor. This morsel was fairly disturbing as well but, it takes place before the near extinction of Druids, so we do get to touch base with another of Gaia’s recruits. The Morrígan pops-in, and does a bit of foreshadowing about Time Isle, and we learn that the events from THE BOGEYMAN OF BOORA BOG are responsible for the archdruid teaching his apprentice that it’s ok to bend or even break the rules when necessary.

We haven’t seen much of Perun, the Slavic God of Thunder, since HAMMERED which is a shame because he’s a real hoot! He and Flidais are looking to spice-up their love life, so they visit an S&M dungeon where she assumes the role of dom. What starts off on a light note quickly turns sour, and their relationship takes a turn for the worse. I have a feeling that their drama may continue to play-out in the final installment, or that might just be me hoping that Kevin Hearne will humour fans.

Granuaile’s POV is font-and-center again which would normally have me strongly considering hitting fast forward, however she actually wasn’t too bad in this short. We catch-up with her in Poland which could have almost been her intro scene at Rúla Búla. Leif has tasked her with clearing out a vampire nest with a group of mercenaries, and some amusing flirting ensues. I wish that we got to see this side of her character more often because then I wouldn’t cringe every time she opens her mouth.

The Elementals don’t often ask the Druids to heal an entire species of animals, so when the call goes out, both Atticus & Owen answer. Circumstances force Greta & O’Sullivan to collaborate, and the problem in Tasmania provides a glimpse of things to come once Loki starts his end game. This tale was also an eye-opener for the archdruid in that he realizes that his pupil is the bridge between the old world and the new, and he acknowledges that he’s proud—so many feels!

The protagonist has mentioned his first companion a couple of times in passing throughout this series, and in THE END OF IDYLLS Siodhachan tells Oberon what happened to him, and why it took him so long to open his heart to another. The Morrígan announces the onset of Ragnorok, and sets the tone for the last novel. Luke Daniels adds yet another voice to his arsenal, and I can’t tell you how psyched I am to listen to his narration of the finale! *sniff*

Audiobook Review: How to Date Your Drago