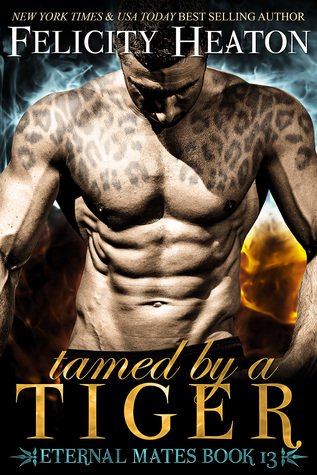 Felicity Heaton’s ETERNAL MATES series tends to return to characters whom we’ve encountered along the way which is a brilliant strategy because no matter how fleeting their appearance was in a previous installment, readers know that every dog cat has its day. TAMED BY A TIGER was the perfect example of this with Talon’s sister front-and-center, and plenty of other kitty shifters along for the ride.

This book touches base with Cavanaugh’s pride following his abdication to August as alpha. I liked seeing how his cousin was faring in his new leadership role, and his response when confronted with a similar dilemma to the one that had caused his predecessor to step down. He’s burdened by his responsibilities, seeks advice at Underworld, and the protagonist’s approach to solving his predicament is very different than his pridemate’s.

I wasn’t sure how Maya would make out as this novel’s female lead because out of all the tigers that were introduced in the earlier volume, she stood out the least in my eyes. But, her sparring match with August, and her love-him-and-leave-him attitude won me over after the first one hundred pages. She may have been overshadowed by her brothers for most of her life however, when it was time to step up, she did so without hesitation.

Maya actually showing up for her arranged marriage came as a bit of a surprise. I’d thought that August would have thrown a wrench into that plan much sooner, although admittedly, his dramatic entrance to snatch her from Pyotr’s arms on her wedding day ratcheted up the entertainment value tenfold. I was also very excited to learn that the author granted my wish—Grey will be headlining in the next title scheduled for September!

If you need to give in to love, TAMED BY A TIGER is not a bad way to go!

7 responses to “Review: Tamed by a Tiger by Felicity Heaton (@felicityheaton)”