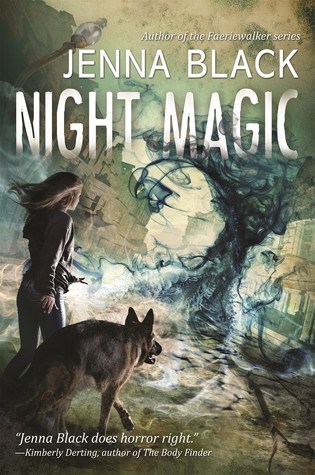 Jenna Black returns to the quarantined city of Philadelphia, where an unsuspecting seventeen-year-old has unknowingly unleashed a dark power that transforms the city into a monstrous hellscape in Night Magic.

Philadelphia is locked in the grip of an evil magic that transforms its streets into a nightmare landscape the minute the sun sets each night. While most of the city hunkers down and hopes to survive the long winter nights, Becket Walker is roaming the darkened streets having the time of her life.

Once, the guilt of having inadvertently let the night magic into the city―and of having killed her onetime best friend―had threatened to destroy her. But now she’s been Nightstruck, and all her grief and guilt and terror have been swept away―along with her conscience. So what if she’s lost her friends, her family, and her home? And so what if her hot new boyfriend is super-controlling and downright malevolent?

Mesmerized by the power and freedom of not having to care about anyone but herself, Becket is sinking ever deeper into the night magic’s grasp. But those who love her refuse to give up on her―even if she’s given up on them. If they can’t find a way to help Becket break the night magic’s hold, the entire city might soon find itself shrouded in perpetual night. But the last thing Becket wants is to be “rescued” from her brand new life, and she will fight tooth and claw to stay exactly where she is.

I was excited to start this book. I really enjoyed the first book in this series. I really enjoyed this mixed up version of Philly that Jenna Black created. I’m not an avid read of YA fiction. I am a reader of horror (not as much I would probably like, but I’m reading more and more each year). I do love Jenna Black and I like her YA too. They tend to be a bit on the darker side and with this horror story that is there in spades.

So this story picks up where Nightstruck leaves off. The city of Philadelphia is under quarantine. Weird things are happening every night. People aren’t who they used to be when they are out at night. If people are out during the transition to dawn, they are turned into one of the Nightstruck. They lose pretty much all of their inhibitions. They see nothing wrong with beating people who can’t defend themselves, stealing or looting or having sex on any street corner. Other things happen during the nighttime hours too. Statues come alive and not exactly has they were when statues. Leo, a lion statue, has a main of snakes and a tail of scorpion. Fences change to other things, like tentacles. Once the sun comes up, everything goes back to normal.

It is hard to talk about this story without giving spoilers to the first story, but I will stick with cover things that are mentioned in the blurb. Beckett is Nightstruck. She is enjoying her time without the worries that the other people in the world deal with. She doesn’t mind that she walks out of a store with a full length fur coat (something she wouldn’t wear before she changed). She does some other things she would never have done before she was out at dawn. She isn’t like the other Nightstruck though.

This story ended with several unanswered questions, like the first book. I know that I will be eagerly awaiting the next book in the series.

Leo continued to accompany us. He helped us get into the shops I wanted, then served as pack mule when I came out. If you’ve never seen the snakes in a metal lion’s mane carrying shopping bags, you’re missing out.

I’d expected to become a wholly different person when I was Nightstruck, but that wasn’t at all what seemed to have happened. As far as I could tell, I was the same old Becket, minus the guilt, the grief, and the insecurity. I might be angry with Aleric and concerned about where those missing hours of my life were going to, but I was still incredibly glad I’d finally given in. If I’d known then that I wouldn’t become some cackling sadist, I never
would have fought it so hard.