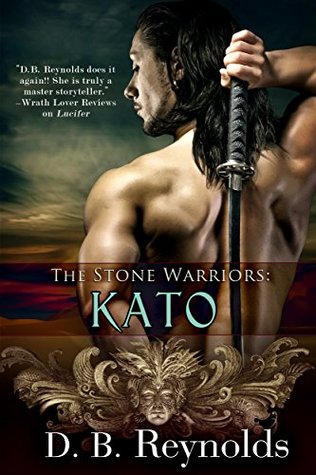 It was a time when gods walked the earth, when armies fought not for bits of land, but for the very existence of humanity. On such a battlefield, five formidable warriors stood against an evil greater than any the earth had ever seen. But evil is not an honorable foe. Betrayed by someone they trusted, the warriors were cursed, one by one, tossed into the maelstrom of time, imprisoned in stone, their freedom resting on nearly impossible conditions. Until . . .

Kato Amadi . . . born of darkest sorcery, unstoppable on the battlefield, his magic is as deadly as his blade. But not even magic could save him from vicious betrayal. Trapped for millennia in darkness and silence, he is freed at last, only to find himself in the middle of a battle against the very beasts of hell he was created to destroy.

Grace Van Allen is a scholar of ancient languages who toils in the dim recesses of a museum basement with only a beautiful stone warrior to keep her company. But when Grace calls upon her silent warrior to help her translate an obscure new language, she breaks the ancient curse holding him prisoner . . . and frees three deadly demons to rampage through her city.

Tracking demons is what Kato was born to do, but he’ll need Grace’s help. And when they discover that Kato’s enemy is still alive and still plotting against him, their hunt takes a dangerous turn, one that might just prove fatal for both of them . . .

D.B. Reynolds is the author of the series, Vampires in America, a series that I happen to love. For some reason, I missed the first book in this new series, but when I saw this book on Net Galley, I knew I had to request it in exchange for a fair and honest review.

Grace Van Allen is doing her post doctoral fellowship at a museum in Southern California. She is an expert in deciphering ancient languages and is working diligently on some ancient scrolls. Her workstation is in the basement of the huge museum and she works day and night-alone when she works at night. Also located in the basement is an ancient statue of a warrior. It sits around the corner from Grace’s desk and during her long hours, she occasionally talks to it. One night she manages to inadvertently break a curse while speaking to it and the statue comes to life. Kato was cursed to live as a statue thousands of years before by an evil sorcerer. He is part of a group of four immortal warriors that this happened to at the same time. Kato’s mother was the Dark Witch, and she created and used him and all his energy for her own evil purposes. He has her dark magic inside of him and can recognize magic in all of its forms. Even the small amount of magic that Grace has, although she has no idea she has it.

With this beginnng, the book immediately goes into action mode. Grace is swept up in a thrill ride with Kato that involves ancient magic, curses, sorcerers, demons, deaths, and last, but not least, romance. Grace and Kato fall into lust easily. Grace is single and Kato is the epitome of the best looking man in the world. And of course Kato has been alone in his stone prison for what seems like an eternity, able to hear and see, but unable to do anything else. He has enjoyed Grace’s one sided conversations with him and he feels he knows her. So it was easy to see them start to hookup early on in the story. Hookups that happen between all the action and mayhem that is occurring around them. And that’s because his breaking free of the curse has angered someone immensely.

This book couldn’t have been more different from her Vampires in America books. A whole different feel to the book, and for a good bit of the story I just wasn’t really sure I liked it. I had to separate it from the other series and get those expectations out of my mind. Once I did that, I did enjoy the read. As I said before, there is plenty of action and there’s a lot of demon hunting as well. The warrior, Damian, and his love from the last book come into the story as well as the warrior’s mentor, sorcerer, Nico. I did enjoy these characters as well as Kato and Grace. However, I did have one more small problem with the read. Kato comes from thousands of years before and the curse also involved him being able to understand all languages just to make it harder for him to be alone. And while there are moments when he is totally confused by everyday colloquialisms, there were other times that he comes out with phrases that just didn’t fit him, as they were too up to date. I found myself pulled out of the story at times to wonder about it. And while that certainly didn’t ruin the book, it took me out of the story enough that I feel it needs to be mentioned. Kudos to the author though, for being able to write a story with a character whose words might cause a problem throughout. In the end, I do think she did a good job with it.

This book ended up being a good read for me. I don’t think I am as invested as I am with Vampires in America, but I will be trying the other books as well. Hopefully, it gets even better from here. As with everything from this author, it’s well written with good characters and a well thought out original premise and world. Recommended to adult paranormal romance readers that don’t mind murders and mayhem in their reads. Adult due to sensual scenes.