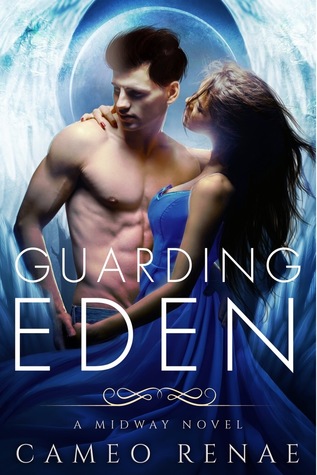 Tucked away at an upscale, private boarding school in Brindle Hollow, Washington, seventeen-year-old Eden East comes face to face with a hideous creature on her walk back to her dorm. Shaken to her core, she's left questioning the world around her, and soon finds herself entering a friendship with a hot, new student named Alexander.

Little does she know, Alex is a Guardian Angel, sent from Midway to protect her from those dangerous creatures—known as Darkling—lurking in the forest outside Brindle Hall. It isn’t long before Alex learns this is no ordinary assignment. Eden’s existence holds a secret; something hidden from even herself.

Eden is thrust into a world where Fallen angels and creatures of the Underworld will stop at nothing to catch her. With Alex at her side and a little help from some of his old friends, they form a formidable front against the enemy.

Hopefully, it’s not too little, too late.

Guarding Eden is a Hidden Wings Spin-off Series and a Midway Novel.
Intended for Ages 15 and over.

The Hidden Wings series by Cameo Renae is a favorite young adult series of mine. It’s about angels and one girl who is about to become a powerful one. Angels may not be as big a thing in books as they once were, but I highly recommend Hidden Wings. When the author decided to write a spinoff series, I was so in to read it! Just so you know, these books were international bestsellers for young adults and took place in Alaska.

Guarding Eden features a different girl, named of course, Eden. She goes to a boarding school in Washington state and is getting ready to graduate. After seeing a monster in the woods while walking late at night, Eden thinks she is just hallucinating-until it speaks to her and threatens her. She is saved(of course)and is understandably shook up. Meanwhile, Alex, a warrior angel has been sent from Midway(where the angels live before being sent out to help people)to protect Eden-and to figure out why the monster-otherwise known as a Darkling-showed itself to Eden. Because once seen, the Darkling will not stop until he kills the one that has seen him. The question for Alex is, did it want to be seen before it killed her or was it a mistake? So even though they are only a few weeks from graduation, he comes to the school as a student.

You can always count on this author to have good characters, ones that you immediately care about and root for, and this book was no exception. Eden is feisty, smart, and totally enamored with Alex when she meets him. Alex is an amazing warrior, one that is not allowed romance with a human. Yeah, that’s so not working. He also happens to be the boy all the girls at the school want as soon as they see him. Besides these main characters, Eden’s group of best friends, Sebastian, Kimi, and Trissa, add to the plot and are well fleshed out by the author. Alex’s angel friends are also all here and were also featured in the Hidden Wings series, so it was fun catching up with all of those characters as well. They are like old friends to me now.

The other thing you can always count on this author to provide, is a book filled with action, violence, fight scenes, romance, and yes, even sometimes, death. And as always, I end up not being able to put these books down. The author can sure write a good young adult book!

On purpose, I am not going to tell anymore of the actual story, no spoilers that way. I am, however, going to highly recommend this series starter to young adults and adults(like me)that enjoy reading good YA paranormal books. I think the age should be 16 plus-maybe even 15 depending on maturity level, due to violence, some language, and yes, even a not terribly explicit sexual scene-but not a closed door one either. These characters are over 18. This can standalone away from the Hidden Wings series, but it’s not a bad idea to read those books to enhance this one-but not absolutely necessary.