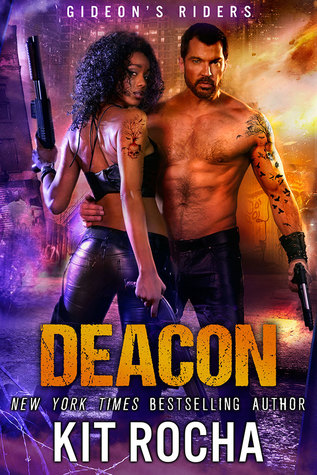 Ana has trained most of her life to achieve one goal: to prove that anything men can do, she can do better. Now she’s Sector One’s first female Rider, and being the best is the only way to ensure she won’t be its last. Distractions aren’t allowed--especially not her painful attraction to the reserved but demanding leader whose stern, grumpy demeanor has already gotten into her head.

Deacon has spent the last twenty years trying to atone for his past, but the blood he spilled as a mercenary and assassin will never wash away entirely. If his Riders knew the extent of his sins, he’d lose their trust and respect. It’s easier to keep them all at arm’s length, especially Ana. But his newest recruit’s stubbornness is starting to crack his defenses.

And their sparring matches are driving him wild.

The passion sparking between them can’t be denied, but neither can the vengeance barreling toward Deacon. When his old squad comes back to punish him for his betrayal, Ana and the Riders are squarely in the line of fire. The only way to save his people may be to make the ultimate sacrifice.

But first, he has to convince Ana not to follow him straight into hell.

I have been a fan of Kit Rocha every since I stumbled upon Beyond Shame back in 2013 (I really wish I could remember how I found this writing team and this series). The Beyond series followed a gang of liquor makers who liked to party in their post-apocalyptic world. The O’Kanes of the Beyond series takes place in Sector Four. After several great books with a new couple for each story and a great overall story arc, the Kit Rocha writing duo have taken us to another Sector, picking up where the Beyond series ended.

Sector One is run by Gideon. He and his family are more than royalty to the people of their sector. It is a little bit like a cult, but Gideon is not like any cult leader that I’ve ever seen (though he has some ancestors who were exactly like what you think about when it comes to cult leaders). Gideon also has his own “gang” kinda like the O’Kanes. They are his Riders. They do what needs to be done to protect the “royal” family and the people in the sector.

In the first book of this series, we learn the characters, but we really get a deeper dive into each one in this book. We also get more of a look into the lives of the Riders. We also see that the Riders have some change coming in their future.

Ana is the only female Rider. Her father was a rider and raised her to be as well. She knows that being the first female means that all eyes are one her. She must work harder and be better than the guys. She sees how the other girls in the sector look at her. It is a lot on her shoulders.

Deacon is the leader of the Riders. They all trust and respect him, but he has a secret. Gideon is the only other person who knows this secret, that is until it catches back up with him. He is forced to tell the rest of the Riders and even steps down as leader while they process what he tells them (as you can tell, his secret is really big).

While Ana and Deacon have chemistry, they are trying to stay apart. One, they are Riders and Riders have one foot in the grave. When they join, their silhouette painted for their wall. The painting is filled in when they die. Second, Ana doesn’t want to be seen as getting special privileges because she was already the only girl. Last, let’s not forget Deacon’s secret. He knows it will come back to haunt him at some point. But sometimes, it is really hard to fight chemistry.

In addition to the romance between Deacon and Ana, we learn a lot more about the Riders, Sector One, Gideon, Ana’s family and Deacon’s past. I really enjoyed learning so much more about this new sector. I also really loved Ana and Deacon’s relationship with Gideon. Gideon is a great leader and I love how he interacts with his Riders. He is completely different, but just as loyal as Dallas O’Kane was in Sector Four. They both take their leadership very seriously.

This is a really great romantic suspense, dystopian story if you’re looking for kick ass women and men. As a general rule, most of the women in this world have no issue being warriors, but that doesn’t mean they all are, but they all have their part to play. You can start with this series without having read the Beyond series. You could even read this book without having read Ashwin, but I would recommend it (because I really loved it, too. Only one extra book to get caught up 🙂 ).

Last, can I say how much I love these covers?

He said it like it was a universal truth, with a tiny shrug and a crinkle between his eyebrows. ‘Not every fight can be won.’
Each Rider faced that truth–if not before they joined, then during initiation, when they stood in front of their own portrait on the memorial wall in the temple. An outline that would be painted in upon their death, just like the others that surrounded it, all the dozens of portraits of Riders who had already died.
Maybe that was the lesson she’d embrace. Riders spent their lives too easily. There was nothing smart about throwing yourself against a brick wall until it broke you. Smart was retreating until you could find another way around the damn wall.
Ana forced herself to relax and nod. ‘All right.’
Deacon’s expression didn’t change. ‘No argument?’
Another trap. Strange how she could see it, recognize the wisdom of silent obedience–and still not manage to hold her tongue. ‘Nope. Sometimes you just can’t win a fight…yet.’
‘Yet,’ he echoed, crossing his arms over his massive chest. ‘Explain.’
She shrugged. ‘I didn’t lose. I withdrew. Fight’s not over until you’re dead. Sometimes something’s important enough to die for. But sometimes you need to pull back and regroup.’