“Well, this is a surprise,” Forneus said, one eyebrow lifting as his gaze slid around the room.
Flame flickered along his fingertips, a reminder of the many reasons why surprising my friends and allies wasn’t the safest option. The demon attorney could call Hellfire at the snap of his fingers, literally. Good thing I’d thrown safety out the window hours ago.
“You invited the freaking demon?” Jinx asked, one manicured hand going to the cross that hung from her neck. “What the hell is going on, Ivy?”
“I can assure you that Hell has nothing to do with whatever reason Miss Granger has brought us all together,” Forneus said, his sulfurous breath making my nose wrinkle. “Your witch made certain of that.”
“For once, I agree with the demon,” Kaye said, emerging noisily from the shadows, the bells on her skirts jingling along with the many bracelets on her tattooed wrists.
I tensed, gloved hands reaching for my blades before my brain registered that the witch wasn’t an enemy, just an ally who liked to make a dramatic entrance. Show off.
Kaye could slip in and out of the shadows better than any normal human. I wasn’t sure if it was something she learned in her early days working with the Hunters’ Guild or if it was a witch thing. What I did know was that no matter how powerful, Kaye’s stealth abilities were no match for the lord of the local cat sidhe.
So, I didn’t even twitch when Torn appeared beside Jinx, ogling my curvaceous friend in her 60’s era Rockabilly dress.
“I do so love surprises,” he said.
Jinx produced a crossbow and aimed it at Torn’s head.
“Pretty sure, you’re the only one,” I muttered.
The fact that every person in the room was armed to the teeth wasn’t helping to lighten the mood. The tension in our tiny detective agency was so thick you could cut it, cube it, and serve it with a side of fries.
My stomach growled, and Hob snickered.
“Ye better get on with it, lass,” the hearth brownie said. “Or did ye ask us here for a tasty treat?”
“You can devour me anytime you like, Princess,” Torn said. “Unless you’d prefer I devour you.”
Ceff tensed at my side, but I shook my head.
“No, get rash,” Marvin said.
The young troll mimed scratching his tongue. Oh for the love of Mab. The kid was like family, but I wasn’t in the mood for his poison ivy jokes, not with a threat this big looming over our heads.
I pounded a gloved hand on my desk, and the room went deadly silent. Go me. The blood-soaked package may have helped.
“This was on the sidewalk when I opened up this morning,” I said, fighting every survival instinct that screamed at me to get as far from the cardboard box as possible.
“Is t-t-that a bloody finger?” Jinx asked, leaning in.
“A gift from one of your admirers, Miss Granger?” Forneus asked.
I swallowed hard, and shrugged.
“Not exactly,” I said.
“I sense no spells on the package,” Kaye said.
“No demonic curses either,” Forneus said, eyes narrowing. “But, in my experience, severed body parts are typically sent as a message.”
It was a message alright, one that I couldn’t ignore. I’d touched the bloody finger before calling my allies together. The skin on decaying skin contact had pulled me into a vision, which is probably exactly what our enemy wanted.
“The package was sent by a group of traveling thrill-seekers calling themselves the Rabid Readers,” I said.
“The rabid what?” Jinx asked.
“Psychics mostly with a love for shifters from what I could gather. They gather once a year for a cage match, pitting warriors against lovers in an epic showdown.”
“And the finger?” Ceff asked.
Even now, my stomach churned and bile scorched my throat as I looked down at the tiny, lifeless finger. I’d noted the finger’s size when I opened the box, but had assumed it was a woman’s pinkie finger. It wasn’t until I sunk deep into the psychic vision, experiencing the child’s fear firsthand, that I’d realized my error.
“Incentive,” I said, palming my silver and iron throwing knives.
The Rabid Readers were smart, deviously so. Our enemy needed warriors to pit against potential shifter lovers. They’d used their psychic powers to find the perfect group of suckers for their epic gladiatorial battle.
They needed diverse combatants with just the right variety of magic ability and skill with weapons. The show had to be exciting and contestants needed to be driven to win. So they’d dangled a prize I couldn’t pass up.
If this was for money, I could have refused. I could have walked away. But not one person in this room would leave a child to die.
I set my jaw and stared down each of my allies. Our ragtag group included me with my throwing knives, a human with scary accuracy with a bow, a powerful witch, a cat sidhe lord with razor-sharp claws, a kelpie king complete with trident and water magic, and a demon who could call Hellfire. We were exactly what the Rabid Readers wanted, and exactly what they would get.
“Incentive for what, Princess?” Torn asked.
“To fight.” 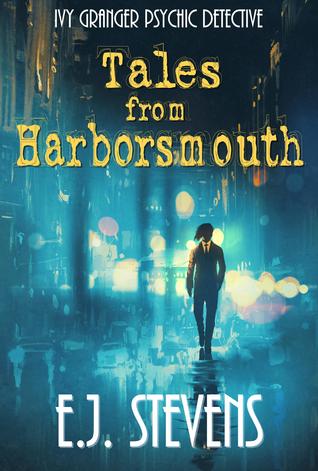 Ivy Granger is a psychic detective with ties to Harborsmouth’s paranormal underworld. Too bad those ties tend to ensnare Ivy and her friend Jinx in the Machiavellian schemes of the city’s teeming population of bloodsucking vampires and psychotic faeries.