I was doomed the moment I agreed to fight for “action” over sex in the world of urban fantasy. I would like to commend Tara Sue Me on her predestined victory, but like all folks of north-eastern European stock I’m used to being born doomed.

But the kind of doom I’m talking about is of a writing kind. It’s the kind of doom that invades all serial fiction. And it’s why we have the tougher job with action than with real warriors than sheet warriors.

Because how do you make action count when you know the hero will return next week, same bat-time, same bat-channel?’

Though doomed, I will try to answer this Question Impossible. And to do so you need to know some top secret stuff about comic books and pro wrestling, where action is good and sex is generally off stage

In comic books, death is no obstacle to any super hero. Spider Man, Batman, even the almighty Superman have kicked the bucket and dropped six-feet-under. I well remember when Kraven the Hunter killed Spider Man to prove he was the greatest hunter in the world. I was convinced this was the end and wanted to see how it would all play out . . .

… and Spider Man didn’t die. He climbed out of his own grave! And while my dad drove me back from the comic shop I shook my head. “But . . . he died.” (and again, coming from a doomed people, death is kinda important).

My dad’s response? “There’s no way they can kill him off for good. Think of how much money he makes Marvel, how many people Spider Man must employ.”

So being popular made Spider Man immortal? No wonder assholes in high school and around the world pursue this dream as if were their last!

Yet I kept reading. And Spider Man keeps compelling us. And we know no matter what fight he gets into with the Green Goblin or the Vulture, or what actor plays him over the next twenty years, the Web-Slinger will live to fight another day.

Yet if Spider Man was a boxer or MMA fighter who never lost, we’d eventually see some garbage on TruTV. If Spider Man was real, he’d be boring and more akin to a malign thug. We have a president who claims he never loses. Hates losers. Loves winning.

So why don’t we hate Spider Man?
Because of something his co-creator Stan Lee called “The Illusion of Change.”

In serial fiction, actual change is difficult to pull off with popular characters. Artistically it might be compelling and transformational to have Peter Parker live with mono for a year, and watch the world get along without him, to see he’s not needed, and then get his ass handed to him by Flash Thompson in a weakened state, and realize that he can reach a lot more people as a medical scientist than swinging around Manhattan. But what of the risk of losing fans?

You just cut off that last bit, and reboot the character so he’s at the same place he started. All change is an experiment that ends with Spider Man’s character returning to what it always has been: a kid with as many problems in the real world as in the super hero world. He called this the “illusion of change.” The changes and results of Spidey being hurt, or being an asshole, or losing a loved one, all these elements return to “first positions” of the character attribute we know and love.

So as a writer the challenge is to make our heroes compelling enough for you to enjoy this whiplash of disbelief and return so that you return for another dose. And that task, that challenge, is not as easy as it appears. Most serial fiction is awful because readers get bored of action where the stakes are as pre-determined as a wrestling show (Will Buffy win? OF COURSE SHE WILL!). Which brings us to pro wrestling (doesn’t it always with me?)

Because in wrestling, as in great fiction, the heart of action isn’t action at all. It’s character. People. They have to be more compelling than their powers. They have to be more interesting than the martial arts they know. They have to have some kwan for you to want to ride with them, knowing victory is assured. Hulk Hogan did that by being larger than life, of having an epic comeback where the audience cheers fueled his “hulking up” against the enemy attack, and crowds around the world felt like they participated in his victory. Bret Hart’s secret power agains giants like Hulk Hogan was that he was a dangerous wrestler. He created drama because he was an underdog who might know a hold or a reversal that would make the difference. Ric Flair was “the dirties player in the game” and could cheat better than most. These elements, the “means” of action, create the drama in a world we already know is “fixed.” Are you entertained? Yes. Are you compelled? Yes. Do you really care who is “champion”? No.

So there you have it. Sex is the oldest contact sport and everyone’s favorite past time as well as the genetic imperative for all life. There was no question of Tara Sue Me’s victory. So instead I have the sneek peak as “why” the losing side of this game is also infinitely compelling. Jason S. Ridler is a writer, improv actor, and historian. He is the author of A TRIUMPH FOR SAKURA, BLOOD AND SAWDUST, the Spar Battersea thrillers and the upcoming BRIMSTONE FILES series for Nightshade Press. He’s also published over sixty-five stories in such magazines and anthologies as The Big Click, Beneath Ceaseless Skies, Out of the Gutter, and more. He also writes the column FXXK WRITING! for Flash Fiction Online. A former punk rock musician and cemetery groundskeeper, Mr. Ridler holds a Ph.D. in War Studies from the Royal Military College of Canada. He lives in Berkeley, CA. 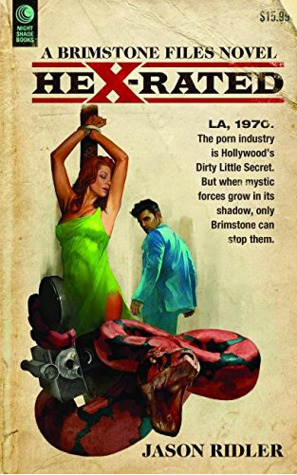 A salacious throwback to the detective pulps of the 70s, Hex-Rated kicks off the new urban fantasy series the Brimstone Files.

Fall, 1970. Los Angeles has always been a den of danger and bliss, but even darker tidings brew in the City of Angels. Cults, magic, and the supernatural are leaking into the worlds of glamour and dives of the gutter. To the spectators walking down Hollywood Blvd, it’s just more proof that La La Land is over the cuckoo’s nest. But to former child magician and Korean veteran turned newly-licensed private investigator James Brimstone, it means business is picking up.

After attending his mentor’s funeral, Brimstone signs his first client: Nico, a beautiful actress with a face full of scars and an unbelievable story of sex, demons, and violence on the set of a pornographic film in the San Fernando Valley. The cops chalk it up to a bad trip from a lost soul, but Brimstone knows better.

He takes the case, but the investigation goes haywire as he encounters Hell’s Angels, a lost book of Japanese erotica, and a new enemy whose powers may fill the streets of L.A. with blood. He’ll have to us his Carney wits, magic tricks, and a whole lotta charm to make it out of a world that is becoming . . . Hex-Rated.