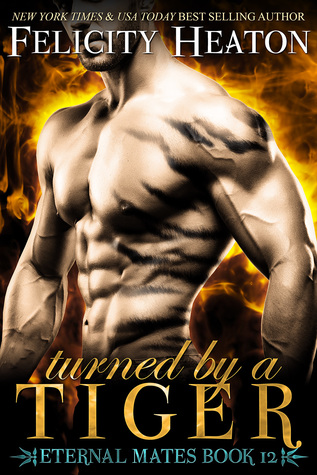 I was sooooo happy to get my hands on the next ETERNAL MATES installment after nearly a twelve-month drought. Felicity Heaton didn’t leave readers high and dry during that interlude though, with her new GUARDIANS OF HADES series there to help fill the void. Still, that didn’t stop me from longing for this universe and its characters, and to top it off, TURNED BY A TIGER is the start of a triple tiger takeover!

This story didn’t adhere to the classic action followed by romance sequence, instead the order of these components were reversed which wasn’t how I personally prefer events to unfold. I need a little bit of adrenaline to get my engine going, so I had some difficulty with the insta-love introduction. Talon’s entrance into Underworld was dramatic however, after the initial shock value wore off the author briefly lost my interest.

The narrative was overflowing with cat puns that kept me grinning stupidly at my tablet the whole way through. Sherry’s nickname for the protagonist was by far the best though. Funny, yet GRRREAT! I also liked that a lot of past couples had their own little skits within the plot line including my main squeeze, Bleu. There was just the right amount of old favourites to compliment the flow along with a preview of a few more pairs to come.

Talon’s secret was a bit of a let-down, but that’s ok because his unusual brother more than made up for it. I know that his sister’s tale is up next, so fingers crossed that TREASURED BY A TIGER is Grey’s book! I’m a tad disappointed that this series is becoming weighed down by felines; I miss the elves, and I wouldn’t be opposed if the bear shifter that we encountered in this volume were to get his own happily-ever-after too.

Get your summer reading party started with TURNED BY A TIGER!

5 responses to “Review: Turned by a Tiger by Felicity Heaton (@felicityheaton)”