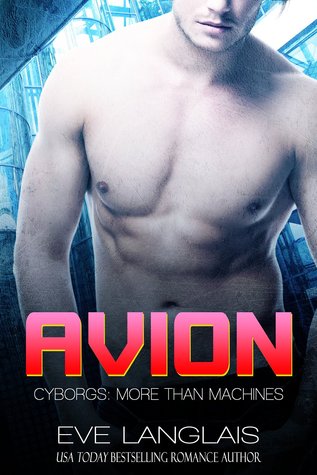 Being a cyborg was so much better when all his parts worked. Avion’s nanotechnology stopped functioning after some experimentation done on him by the military. They broke him and now, Avion is no better than a human, even more annoying, he’s dying.

But at least he completed his final mission. He saved, One.

Mysterious and alluring, Avion isn’t the only person who wonders what surprises this woman hides. The human military and their alien allies fear what she’s capable of and will stop at nothing to destroy her. However, the one thing they didn’t take into account is that the cyborgs always protect their own, and they aren’t afraid to use deadly force.

And no one could imagine the depths One will stoop to in order to protect the man she loves.

The Cyborgs: More Than Machines books can be read as stand alone stories, however, for total reader enjoyment it is recommended you read them in order.

The last book in the Cyborg series. I’ve had a really good time with this series. I was happy with the ending and the series as a whole. Not only where the characters a lot of fun, but we finally get to learn more about them.

This story picks right where Adam left off. The Cyborgs are running from Earth with their new additions, of Adam and his doctor. They also rescued the voice that had been talking into Avion’s head. She goes by “One”. We know only a little at the beginning of the book, the cyborgs know even less.

Avion is still dying and no know why and how his nanos have died. They still don’t know how to get them started back up. One (who does eventually take the name Lilith). has an idea so she takes the cyborgs to a place where she isn’t supposed to ever visit again.

So, we finally learn about the nanotechnology that keeps the cyborgs going. We also learn more about the military adding it. I think it wrapped up all the plot strings of this series. There is room for more stories if Eve decides she wants to (she has been going back adding more stories to what were previously ended series recently with F.U.C. and Princess of Hell series. And that is not a complaint. I plan to listen to the next F.U.C. very soon.), but it will hold this way too. I just want to point out that I won’t say “no” to more cyborgs if the mood strikes her. 🙂

“I’d rip out his tongue,” she advised.
“Good plan. But we can’t act on it. For one, his wife is the deadliest woman I know, after you of course,” he said with a laugh, stroking the back of her hand.
“Is there another reason why I cannot twist his head until it pops off? I did that with a doll many years ago, and the doctors found it so interesting. I can only imagine their reaction if I did it to a living thing.”
“I really hope you’re joking,” Seth mumbled.
“You got my jest!” She seemed so pleased. Meanwhile, Seth sighed in relief, and even Avion felt some tension loosening.
His lady had some rough edges when it came to interacting with others.
“The other reason we can’t sit on Seth and shave his head, turning him into a comatose idiot until it grows back, is because he’s an excellent ally, and we don’t kill our allies.”
“No matter how annoying?” she groused.
“Even if he’s insufferable.”

“Four times the speed? Are you freaking nuts?”
“According to the psychiatrists, yes. Certifiably so and a danger to those around me.”
Lilith’s stark announcement had them all gaping at her.
Only Avion caught the sad undercurrent of her mind.
Aramus guffawed. “Girl, you might be freaky, but I think you’re going to fit in just fine.”
Insanity wasn’t a flaw when among cyborgs. It just made her one of them.