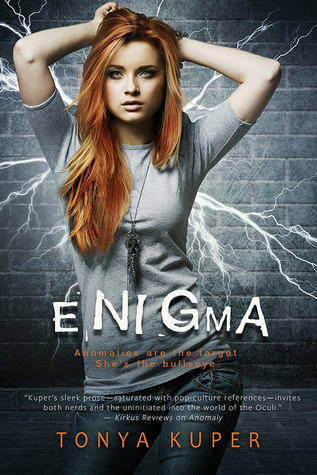 Escaping with Reid Wentworth should have been fun, but how can I enjoy it when I just (accidentally) killed someone, my mom and brother are in danger, and the Consortium is trying to enslave humanity? (Yeah, they aren't fooling around.) So feeling something for Reid Wentworth was not part of the plan. Trying to help unite the Resistance against the Consortium means I can’t be distracted by hot boys.

The Resistance secret hideout isn’t exactly Hoth's Echo Base. A traitor there wants me dead, but we have no idea who it is. And with both the Resistance and the Consortium trying to control me, the only one I can trust is Reid. If we’re going to have any chance of protecting my family, controlling my unstable powers, and surviving the clash between the Oculi factions, I’m going to have to catch this traitor. By using myself as bait.

The Schrodinger’s Consortium series is best enjoyed in order.


A few years ago, I read and enjoyed Anomaly, by this author. It was a one day read for me, because it was just that good. And then I waited for the second book, checking periodically to see if it had been released. I was finally rewarded to see it was releasing soon and received a copy for review purposes from Net Galley.

Josie was a seventeen year old science nerd living in Florida with her parents and brother. Out of the blue she meets Reid and Santos, who change her life forever when they tell her what she really is. No, she’s not a paranormal being, or a princess of Hell, or anything like that. It’s more a science fiction thing. She is part of the Oculi world and is able to change reality with her mind. Simply explained, if she wants a drink, she can Push it and she has a drink. If she wants to take the drink away, she an Retract it. Most Oculi people can either Push or Retract, but not both. Because Josie can do both, she is an Anomaly and now with even more unusual talents making themselves known, she’s been dubbed an, Enigma. Reid is now her trainer and self appointed bodyguard. They are on the run together after the events that unfolded in the first book. They are also falling for each other. When Josie learns that her mother and brother are at the Hub of the resistance and knows there is a traitor there, she realizes she must get to the hub to protect them. Why resistance? There’s a group, the Consortium, that wants to take over all of the Oculi and use them for their own nefarious purposes. So a resistance was born, many years before, and Josie and Reid’s parents have pretty much always been part of it-although until now Josie has been in the dark about it.

Some young adult books that you read, really don’t seem like true young adult books to me. They touch on realities of young adult lives, with possible sex, drugs, drinking, among other things that teens face today.Those are the books for ages 16 plus. Then there are books like this one, and none of those things are being faced by these teens. Boring, no. Just really a young adult book that is for young adults. Oh, there is a bit of lust between the main characters and that is typical for teenagers in the throes of first love, but that’s about all. And that was okay, because instead, we are treated to a good amount of action, with lies and betrayals mixed in with the violence, and a sweet romance. I honestly didn’t figure it all out, well part, but not all, and that is a good thing when reading a book like this one.

To be honest, I enjoyed the first book more than this one. I think that’s because the first one was all new to me, new world, abilities, and new first romance for the main characters. And while I remembered the first book, it had been just long enough, with over three hundred books read in between, that I didn’t remember all the ins and outs of the first book. In this case, I think there should have been a bit more explanation to some of the background that was covered previously. Truthfully, I was a bit lost in the beginning, but decided after not being able to find my copy of Anomaly, just to go with it. So this is definitely not a standalone. Don’t get me wrong, it was well written and fairly well paced(although I wanted more action in the beginning),so I really enjoyed the read. The two main characters were perfect for this book and finely drawn by the author. And the bad guys were really terrible-also a good thing in a book of this type. I also enjoyed getting the story from both main character’s perspective. Doesn’t always work, but it did for both of these books.

I recommend this to young adult readers ages, 14plus. This may have been a duology, but it totally could have another book added someday and if so, I will be right there reading it.

Tonya Kuper is the author of ANOMALY, the first in the Schrodinger's Consortium Series, a young adult science fiction trilogy, released November 4, 2014 by Entangled Teen. She fell for Young Adult lit while earning her Masters degree in Reading Education. She's a mom to two awesome boys, an alt music junkie, a Star Wars nerd, and in love with Sherlock.