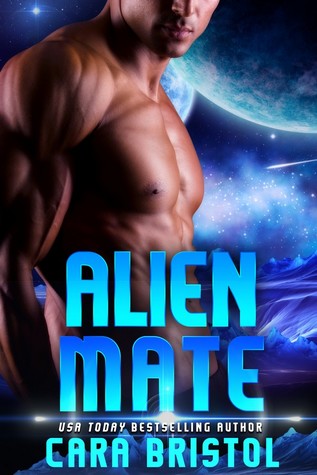 I'm Starr Elizabeth Connor. Earth's government falsely convicted me of a crime, packed me on a ship with other female felons, and sent us to Dakon, a primitive, frozen wasteland of a planet. Why? Earth needs minerals, and Dakon is desperate for females.

I am Torg. I have waited 34 rotations for a mate of my own. With this shipment, I was sure to get a fine, sturdy mate who'll bear me many daughters. Instead, I receive a small, curvy, pale-haired female who looks at me with anger and fear.

It is only when we 'kiss' that I believe things may work out between us. But I'm hearing rumors that Starr and her shipmates are law-breakers. To survive, Dakonians must obey all laws … or be exiled into the frozen wasteland. Just when I have found her, will I have to send my mate to die?

I first heard of this book with reviews from both Lola and Sophia, who are both better at reading and reviewing close to release date. That allowed me to be able to still request this book from NetGalley. I’m so glad that I did, because I found this book to be very sweet and fun.

The story starts with Starr Connor getting convicted of killing Jaxon Carmichael. She swears it was self defense and that she didn’t hit him that hard. However, the Carmichaels are a very powerful family. Starr is quickly sentenced and shuttled to a ship headed for another planet. She quickly learns that she is the only woman who didn’t volunteer for this trip. These women convicts were offered to live free as mates on an alien planet instead of living behind bars on Earth. Starr wasn’t given this offer, just forced onto the ship.

Dakon is a primitive planet. It used to have more modern conveniences, but was struck by an asteroid, which killed all of their technology and even drastically changed their weather. Now, the planet is much like Antarctica. Right after the asteroid hit, they were in perpetual winter for a while, but now they have some summer. They lost most of their population and pretty much all the women (they think a virus was on the asteroid that affected only affected the women). Dakon is rich in an illuvian ore, which Earth uses to power its technology. So the planets agreed on a trade.

Starr quickly becomes friends with two girls on the ship, Tessa and Andrea. Once they arrive on the new planet, the women are lined up and the men select their mates based on a lottery. Torg was third in line to pick, but as clan chief, he had some matters to deal with before he could head to find his mate. When he arrives, he gets the only woman that was left. She was nothing like he expected. She is small and blonde (the Dakonian women are large and darker skinned and hair color).

This was a fun story. Even those these two were complete opposites, they quickly come together. Starr make me mad when she’s thinking about nothing but getting home and fighting her case (which for that I don’t blame her), but she then continues to move the relationship forward. She even encourages sex with Torg (which she shouldn’t have done if she wanted to still go home). As this is a romance, I will say that it isn’t a spoiler that she ends up not wanting to leave in the end, so she doesn’t break his heart, but she didn’t know that when pushed things along.

There is also some suspense in this story. There is a Dakonian woman, Icha, who is used to the men falling all over her because she is one of the few women left on the planet. She likes to cause trouble. I was not a fan. Then there are booby traps that were set up. So there is the search for who did it.

This is a quick read, but a lot of fun. I like how Starr and Torg work to overcome their differences to become a couple. You see the cultural differences between the two. I liked seeing Starr taking an interest in learning to read and write in their language (she had a oral translator implanted, so speaking wasn’t an issue, though some words and phrases didn’t translate well). I would’ve like to see her try to learn more like making fires, cooking and other things like that. Her friends took to those tasks quickly.

I don’t know if there will be more books set in this world, but I would be up to reading them. I’m also going to look into more books by this author. She has another (that I also remember Lola reviewing), called Pets in Space. How cool does that sound??