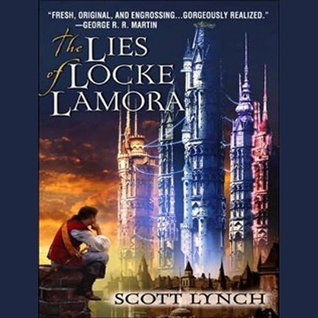 of Camorr, built on the ruins of a mysterious alien race. But born with a quick wit and a gift for thieving, Locke Lamora has dodged both death and slavery, only to fall into the hands of an eyeless priest known as Chains---a man who is neither blind nor a priest. A con artist of extraordinary talent, Chains passes his skills on to his carefully selected "family" of orphans---a group known as the Gentlemen Bastards.

Under his tutelage, Locke grows to lead the Bastards, delightedly pulling off one outrageous confidence game after another. Soon he is infamous as the Thorn of Camorr, and no wealthy noble is safe from his sting. Passing themselves off as petty thieves, the brilliant Locke and his tightly knit band of light-fingered brothers have fooled even the criminal underworld's most feared ruler, Capa Barsavi. But there is someone in the shadows more powerful---and more ambitious---than Locke has yet imagined. Known as the Gray King, he is slowly killing Capa Barsavi's most trusted men---and using Locke as a pawn in his plot to take control of Camorr's underworld.

With a bloody coup under way threatening to destroy everyone and everything that holds meaning in his mercenary life, Locke vows to beat the Gray King at his own brutal game---or die trying.

I read this book many years ago (way before I was even on Goodreads, so I know it was before October 2009). I bought this audiobook a few years ago to revisit this series (I only read this one book and wanted to read more, but wanted to revisit this one before going to book two). I got it as part of Audibles 2 for 1 deals. I’m just now getting around to listening to it (after I just bought book two in another 2 for 1 deal).

I didn’t remember a lot of what this story was about. I just remembered that I really liked Locke and I found that this hasn’t changed. This story is told in multiple timelines. There is a story with Locke in “present day” and then Locke as a child and going through training to become the con man he becomes (this is one of those things that I completely forgot about).

So Locke is an orphan boy that was taken in by a guy known as The Thiefmaker. The Thiefmaker takes boys and trains them to be, well, thieves, among other things. He then sells them to gangs, etc. However, Locke quickly becomes more than what The Thiefmaker is willing to deal with. He takes him to “The Eyeless Priest” known as Father Chains. Chains takes boys (well there is a girl too, but she doesn’t have a large part in this book) and trains them to be sophisticated thieves. He doesn’t want pickpockets, but people who can pull off the long con. He works to teach them accents, manners, skills, languages, fighting, etc.

In the “present”, we have Locke and his gang running a long con on the elite, or Peers, of Camorr. He is planning on having the biggest take ever. He and his gang are ready for a con this long. Things just don’t quite go as they plan.

I really love the characters of this series. Locke, as the leader of this gang, is great, even if his confidence is his biggest weakness. I also really like the other members of Gentleman Bastards, Jean Tannen, Calo Sanza, Galdo Sanza, Bertilion “Bug” Gadek (an apprentice in “present” time) and even Father Chains. They each have their strengths and weaknesses and they work together so that they all do the part they are best suited for.

This story isn’t a faced paced story. It is long and so it may be hard for some people to get through (I’ve heard that from people in the past). I even upped my listening speed, but I still really enjoyed the story.

This is a fantasy, but it takes a while to show it’s hand. It takes place in what would be similar to Italy (the majority of the names have an Italian flare to them and there are gondolas). At first, you hear some about alchemy, but then as the story goes on, you learn about the Bond’s Mage and his Scorpion Falcon. They are really the big part of the fantasy of this story. Not sure how much more it picks up in other series. It was still enough to keep me interested.

If you like fantasy that doesn’t have to be fast paced that have really great characters, this might be a good book for you. I will warn you, this is a bit like Game of Thrones in that there is not a happy ending for everyone involved (I hope that isn’t saying too much).

Locke Lamora’s rule of thumb was this: a good confidence game took three months to plan, three weeks to rehearse, and three seconds to win or lose the victim’s trust forever.