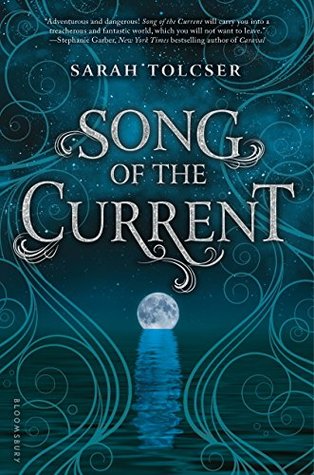 Caroline Oresteia is destined for the river. Her father is a wherryman, as was her grandmother. All Caro needs is for the river god to whisper her name, and her fate is sealed. But at seventeen, Caro may be too late.

So when pirates burn ships and her father is arrested, Caro volunteers to transport mysterious cargo in exchange for his release. Secretly, Caro hopes that by piloting her own wherry, the river god will finally speak her name.

But when the cargo becomes more than Caro expected, she finds herself caught in a web of politics and lies. With much more than her father's life at stake, Caro must choose between the future she knows, and the one she could have never imagined.

I love YA fantasy. I don’t know why, I just do. That being said, in recent years, I’ve become a bit gun-shy, preferring to rerereread old favorites rather than taking a chance on a new author.

I guess I should say I love good YA fantasy.

And sadly, these days, most of it is crap: instalove, cliches, poor world-building, plot holes, deus ex machina, etc. Any or all are likely present in 90% of new series.

Or maybe I’ve been unlucky in my reading choices. *shrugs awkwardly*

Regardless, SONG OF THE CURRENT is the exception. I was hooked from the first line:

There is a god at the bottom of the river.

From there it only got better.

Tolcser gives us a heroine with moxie to spare—View Spoiler »she doesn’t swoon the first time the obvious love interest tries to kiss her, she slaps him « Hide Spoiler—who agrees to deliver a package to secure her father’s release from imprisonment, and that may not sound like much, but it is.

Caro and her father are wherry folk, their livelihood dependent on river trade, and 1. pirates are out to destroy any vessel that potentially carries said package, and 2. Caro has yet to hear the voice of the river god who guides her people through the language of the small things.

So she’s brave. And determined.

Pa shrugged on his good wool overcoat, arranging the collar so it fell just right. His somber manner heightened my worry. He only wore that coat to temple, or to pretend he hadn’t drunk too much the previous night.

Basically, I loved her. Which is important as I’m a character-driven reader. By herself, Caro would have been enough for me to enjoy this book.

The world-building and the plot were also fantastic. I was enthralled by the gods who interact with their people, and there was more than one twist that I didn’t see until I was right on top of it.

I read the whole thing in one sitting. If you also love YA fantasy I suspect you will too. Highly recommended.