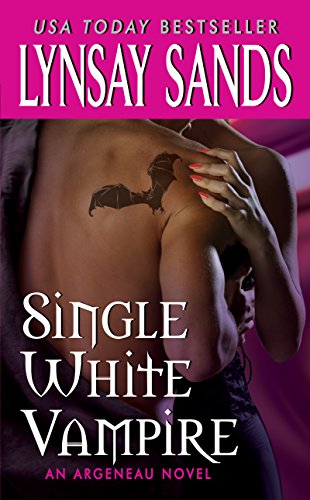 The third book in her phenomenal Argeneau vampire series, Single White Vampire by the incomparable Lynsay Sands is an unadulterated delight! This paranormal romance classic follows the romantic adventures of a dark and handsome immortal who writes paranormal romances, and who’d love to sink his teeth into his sexy new editor. When it comes to red hot vampire love stories, New York Times and USA Today bestseller Lynsay Sands is Queen of the Night!

Fun. That’s the first word that came to mind when I was thinking about writing this review. As I have said on a few of the other reviews I have done with this series, they are fun reads and there’s really nothing scary about the early books in the series. The later books are a bit more serious and have bad villains and those were good too. And still fun.

I am not really sure why this is named, Single White Vampire, other than it’s a catchy title. The title kind of implies matchmaking through ads or a dating website, but no, not so much. Or at all really. The main characters are Kate, a publishing editor, and Lucern, a six hundred year old vampire author. She needs him to do some publicity for his popular vampire books, while he wants her to quit harassing him to do so. But Kate is tenacious and in need of proving herself in her new position at the publishing house, so rather than take “NO” for an answer,she leaves New York City and turns up on his doorstep in Toronto. She is unaware that he is a vampire and is actually writing of his own family and their romances, complete with correct names. Of course, this baffles her when she meets all the people from his books, but takes it in stride and just thinks that Lucern is kind of eccentric. The story really takes off when the two end up at a Romantic Times type of convention together for a week-against his better judgement.

I’ve never been to a book convention, but this made it sound like such a good time. I think book bloggers would relate to a lot of the events that happen along the way there. Lucern starts out wanting to be anywhere but at a public book event, to being the star of the show with woman hanging on his every word or move. Kate goes from thinking that he is an irritating recluse, to being extremely attracted to him, as he is to her. She also starts out being really pushy and slowly begins to see why he is the way he is. When his blood doesn’t get shipped to him on time, the story gets laugh out loud funny at times-especially when she walks in on him about to bite her fellow colleague-a man. Funny because she thinks he’s coming on to the poor man. To be honest, this book had me laughing at several different parts of the book. Out loud,

There’s not a lot of world building, pretty much just enough to explain to Kate what he really is, and how he came to be. It’s an interesting twist on vampires and it’s touched on just enough not to be boring in each book. I appreciated that immensely. That makes these standalone pretty much if you want to read them out of order, but I do know that some go together at times-for example two of the more recent ones that feature twin brother vampires.

I enjoyed the premise of a book convention and a disinterested vampire author, the good characters, the just enough world building, the pacing, and of course the writing skills of the author. Pure escapism for the paranormal romance fan that doesn’t want their reads to be all action or bad experiences for the characters. There is a bit of action and a bad experience or two, but nothing too serious.

Highly recommended to adult paranormal romance fans-adult due to some steamy scenes, and some almost steamy scenes, as well. As always, I enjoyed my time with the Argeneau family.