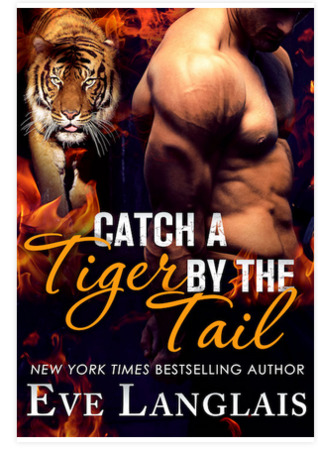 Previously published in the anthology Wild, the paranormal queen of steam and sass pulls out all the stops in this sexy, funny short story from New York Times bestselling author Eve Langlais.

Broderick has a job to do—audit the books of a gentleman’s club. Sounds simple, except his company wants him to find dirt linking to the mob, his secret mob employer wants someone to pin the blame on, and the bar manager at the heart of the controversy doesn’t want him—even though she’s his mate.

This is a fun novella. This story can be read as a standalone, but is also set in the same world as Legal Wolf’s Mate. This story was everything I expect with an Eve Langlais book. Fun shifters that might have some quirks. Laughs, sexiness and some suspense. A great way to spend a few hours.

This story is about Broderick. He works for his alpha as an accountant. I instantly loved his nerdiness. Broderick is a great friend to the alpha, but is much bigger help with numbers than as muscle (but don’t let that make you think he can’t fight, because he can). He is sent to the alpha’s strip club to check the books, because something is going on with them.

Lulu hasn’t been running the club for very long and she knows that something is up. She knows that the owner is a mafia boss, but he doesn’t seem to be a big part of this business. She’s never met him.

This is a really cute novella. I had a great time with these too. I enjoyed the suspense and there was a twist that I didn’t see coming. I had a lot of laughs. Fabian, the alpha, is the hero of the next story. I can’t wait to dig into it.

She shrugged before grinning. “I guess. But, now what, Garfield?”

He didn’t even try to hide his shudder. “Are you comparing me to a domestic breed? I’ll have you know I’m a siberian tiger. A rare and majestic species.”

“Speaking of ego, are those dark roots I see at your temple?”

His fingers brushed the area in question. “I kind of have a stripe on the side. I’ve had it since I was a kid. I get it dyed to look normal.”

Lulu snickered. “Normal. There’s nothing normal about a geeky tiger in an accountant suit.”

20 responses to “Review: Catch a Tiger by the Tail by Eve Langlais (@mlsimmons, @EveLanglais, @SMPRomance)”