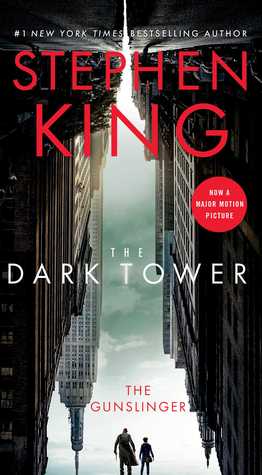 “The man in black fled across the desert, and the gunslinger followed.”

In a desolate reality, on that mirrors our own in frightening ways, a lone and haunting figure known only as Roland makes his way across the endless sands in pursuit of a sinister, dark-robed mystery of a man. Roland is the last of his kind, a “gunslinger” charged with protecting whatever goodness and light remains in his world—a world that “moved on” as they say…and the only way he can possibly hope to save everything is to first outwit and confront this man in black, then make him divulge his many arcane secrets. For despite the countless miles he’s already traversed, Roland knows these will merely be his initial steps on his spellbinding and soul-shattering quest to locate the mystical nexus of all worlds, all universes: the Dark Tower…

So here’s the deal . . . THE DARK TOWER obliterated my long-running book funk. I read all ten of the original series graphic novels, then I read the five from the spinoff.

Then I had to read the real thing. #cantstopwontstop

B/c after reading all FIFTEEN of the graphic novels, Roland still hadn’t made it to the tower. *bangs head against wall*

And after reading THE DARK TOWER (the novel), I discovered that with the addition of a few flashbacks, probably from later installments, all TEN of the original series of graphic novels were based on this first installment of the books.

They were pretty much the same story. Verbatim. Maybe that’s common in this scenario. I don’t know. I don’t think I’ve read a graphic novelization of an existing book before.

But here’s the thing: whether it was the additional background or the gut-wrenching illustrations that accompanied Roland’s trials and tribulations (of which there are many), he’s a much more likable character in the graphic novels.

Not kind of. Really, really an ass.

Which is a symptom of the bigger problem: there is a severe lack of character development.

You: In a Stephen King novel?

Me: Not in the traditional sense, but YES. There was.

And that was after he went back and edited it for rerelease. B/c apparently if you’re Stephen-effing-King, you can do that. #itsgoodtobeking

I’m still hooked. I’d bought and downloaded #2 somewhere around 75% into #1, b/c I gots to know, I gots to. *shakes fist at curiosity gods*

Do I recommend it to anyone else? Not yet. We’ll see. I hear it gets better, but for now I’m shelving it as what-the-hype.

3 responses to “Review and Squawk: The Dark Tower by Stephen King”