Deborah Wilde is one of the authors who’ll be participating in STOMP VS ROMP this August, so I thought I’d give you a sneak peek of what you can expect from her upcoming guest post by sharing with you an excerpt from her newest release, THE UNLIKEABLE DEMON HUNTER: STING. There’s also a $10 Amazon gift certificate up for grabs. Happy reading!

Rohan’s arm shot out to the wall, blocking me. The two of us faced in different directions. How apt.
“Move,” I said
He didn’t budge.
I stared resolutely ahead.
Finally he dropped his arm.
I pulled my keycard from my coat, walking directly to my room. No passing go. No collecting $200.
“Don’t leave.” He spoke quietly but in the silence of the corridor, I had no trouble hearing him.
My hands balled up. Hadn’t it been enough for one night? That thread between us that had felt so comforting earlier threatened to strangle me now. Anger fueled my turn. I would have welcomed a corresponding anger in him, but the naked longing on his face and the defeat in the slope of his shoulders undid me. That and his sincere, “I love watching you dance.”
The hallway was empty but it suddenly felt hard to breathe.
He held out a hand.
I leaned back. The magnetic push/pull between us demanded a certain distance, a certain resistance, as much as attraction. Wrung out on every level, I couldn’t afford to let Mr. Force-of-Nature Mitra take advantage of my weakened boundaries to redefine our hook-ups into whatever vision he had of them.
The air conditioning kicked in and I wrapped my arms around myself.
“When you see my shower, you’ll thank me.” He scrunched up his face, a lock of hair falling boyishly over his eyes. “Nothing happens. Just sleep.”
I wasn’t sure if that sweetened the offer or not, but I nodded. A global wanderer, hopeless romantic, and total cynic with a broken edit button, Deborah writes urban fantasy to satisfy her love of smexy romances and tales of chicks who kick ass. She is all about the happily-ever-after, with a huge dose of hilarity along the way. “It takes a bad girl to fight evil. Go Wilde.” 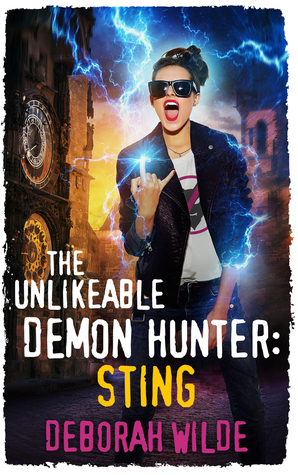 After a bumpy start as the only female demon hunter in the top secret Brotherhood of David, Nava Katz heads to Prague for her first undercover mission: unmasking a demon movie star. She’d be all kinds of thrilled if it weren’t for the fact that her fellow hunter-with-benefits, Rohan Mitra, has reclaimed his rock star status and assigned Nava the role of groupie.

Rejecting her “be a good girl and follow orders” directive, Nava unleashes an alter ego guaranteed to hook their celebrity target and drive Rohan crazy. No downside-until she finds herself up against Rohan’s past, the Brotherhood’s antiquated thinking, and her own identity issues, turning her personal life into a bomb that could blow up the entire operation.

Sparkly and deadly; it’s a plan.

Be Sure to Check Out The Unlikeable Demon Hunter, Book 1

On Sale Today for $0.99!
Giveaway
a Rafflecopter giveaway